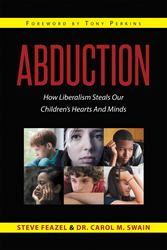 “Abduction: How Liberalism Steals Our Children's Hearts And Minds," the creation of published authors Steven Feazel and Dr. Carol M. Swain, is a practical guide to push back against the Liberal efforts designed to reshape children’s worldview and destroy their moral compass.

Steve Feazel an ordained minister who successfully planted two churches and served as an adjunct college professor in business. Now in retired status, he has produced three award winning, faith-based documentaries on the topics of pornography (Every Young Man’s Battle), abstinence (Yellow Roses) and abortion (A Voice for Life). He is an active writer and speaker and holds the following degrees: BA – Olivet Nazarene, M. Div. – Nazarene Theological Seminary and MBA – Arizona State. He and his wife, Edythe, have two grown sons and four grandchildren and reside in Gambier, Ohio. Website: http://www.visionword.com

Dr. Carol M. Swain, Professor of Political Science and Professor of Law at Vanderbilt University, is an award-winning author and a widely recognized expert on race relations, immigration, and evangelical politics. She has written or edited seven books. Her most recent book is Abduction: How Liberalism Steals the Hearts and Minds of Our Children (coauthored with Steve Feazel, 2016). Dr. Swain’s other books include Black Faces, Black Interests: The Representation of African Americans in Congress (1993, 95); Be the People: A Call to Reclaim America’s Faith and Promise (2011); The New White Nationalism in America: Its Challenge to Integration (2002); Contemporary Voices of White Nationalism (2003); and Debating Immigration (2007). Her op-eds have appeared in The New York Times, The Washington Post, The Wall Street Journal, The Washington Times, and USA Today. Dr. Swain has appeared on thousands of television and radio shows. In 2016, she was one of the leading experts in Dinesh D’ Souza’s latest film, Hillary’s America: The Secret History of the Democratic Party (2016). Dr. Swain lives in Nashville, Tennessee where she is active in church and civic activities. Twitter: @carolmswain Facebook: Profcarolmswain; E-mail: carolmswain(at)gmail(dot)com; Websites: http://www.bethepeopletv.com, http://www.carolmswain.net

Published by Christian Faith Publishing, Steven Feazel and Dr. Carol M. Swain’s new book aims to help parents who seek to protect their children from the devious deception of a liberal agenda. The authors sound an Amber Alert for the souls of America’s youth. Movies, TV, music, court decisions, news reports and the education system are all corrupted by the Left to control the nation’s youth.

Tim Wildmon, President of American Family Association, believes that "Steve Feazel and Dr. Carol Swain ring a warning bell for all parents to heed who want their children to embrace and cherish traditional values and moral living that will allow them to live happy and productive lives. The book reveals the dangers of a relative morality while providing practical action steps that parents can take to prevent their children from becoming conformed to the secular pattern of the world."

Eric Metaxas, New York Times Bestselling author of "Bonhoeffer" and "If You Can Keep It — The Forgotten Promise of American Liberty" admires the work, saying, "I thank God for Carol Swain. Very few people are willing to see, much less say what she and Steve Feazel say in this tremendously important book. It is disturbing, but it is true, so it is up to us to see it for ourselves and help others to do the same. Please spread the word."

Michelle Malkin, author of "Culture of Corruption" and "Who Built That" shares "Everywhere we turn, from our schools, to Hollywood, to the media to the courts, children's minds and souls are being usurped by the radical secular Left. Carol Swain and Steve Feazel tackle the immoral architects of the "New Morality" in this trenchant and timely book -- and show parents how to fight back".

Dr. Alveda King, Civil Rights and Pro-Life Activist, Author, Christian Minister says the book is "A national wakeup call sounding the alarm on how sinful forces are undermining timeless spiritual values which are so important to maintain to nurture the success of future generations. This unique book provides positive insight that if applied can push back against a culture that places too little value on morality."

View a synopsis of “Abduction: How Liberalism Steals Our Children's Hearts And Minds" on YouTube.

Consumers can purchase “Abduction: How Liberalism Steals Our Children's Hearts And Minds” at traditional brick & mortar bookstores, or online at Amazon.com, Apple iTunes store, Kobo or Barnes and Noble.

For additional information or inquiries about “Abduction: How Liberalism Steals Our Children's Hearts And Minds,” contact the Christian Faith Publishing media department at 866-554-0919.