Recent release “Dark Matter, Antimatter, and Galaxies: Beyond the Standard Model” from Page Publishing author Michael Lindsey is a thought-provoking elucidation of ideas that part from the conventional theories of modern physics. 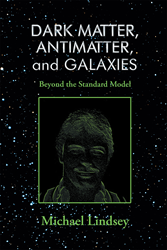 Michael Lindsey, a staunch nonconformist and maverick, has completed his new book “Dark Matter, Antimatter, and Galaxies: Beyond the Standard Model”: a comprehensive look at physics from microcosmic to macrocosmic, and provides thoughtful contemplation at how the two interplay on the grandest of scales.

Published by New York City-based Page Publishing, Michael Lindsey’s compelling work provides explanations for a variety of physical phenomena in a fashion that can be understood by readers without advanced degrees in physics.

Years before the atom was split, there was a movement to stop research, believing that scientists had a complete understanding of the universe. Lord Kelvin had proclaimed there is nothing new to be discovered in physics now. In truth, more than a hundred years have passed since then and standard theorists still have many unsolved mysteries and conspicuous conclusions. The greatest research today is beyond the standard model or BSM.

For two thousand years, many great minds of science and philosophy have laid a solid foundation of truth. Modern technology including colliders and satellites have provided a wealth of observations. A critical mass of information now exists, making current mysteries of science solvable with a simple paradigm shift.
The key to the understanding of the universe is in dark matter.

Readers who wish to experience this illuminating work can purchase “Dark Matter, Antimatter, and Galaxies: Beyond the Standard Model” at bookstores everywhere, or online at the Apple iTunes store, Amazon, Google Play or Barnes and Noble.