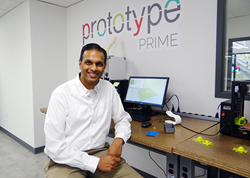 With room to incubate over 60 entrepreneurs and their employees, and boasting 3D printers, laser cutters, and electronics manufacturing capabilities, Prototype Prime is now the most cutting-edge facility north of the Atlanta perimeter.

Prototype Prime, a tech incubator and maker space providing education, resources and support for innovators in the metro Atlanta area, today announced its grand opening in Peachtree Corners, Ga. The first maker space in Gwinnett Country, Prototype Prime provides a workspace tailored to inventive and forward-thinking entrepreneurs, from students to professionals to retirees.

“Our vision is to launch more scalable tech startups by providing the tools and resources they need to bring new products to market,” said Sanjay Parekh, co-founder. “With room to incubate over 60 entrepreneurs and their employees, and boasting 3D printers, laser cutters, and electronics manufacturing capabilities, Prototype Prime is now the most cutting-edge facility north of the Atlanta perimeter.”

Over the past decade, Georgia has consistently ranked second for states experiencing large increases in entrepreneurial activity, with technology being one of metro Atlanta’s major industries. Despite these positive trends, the majority of resources available for startups has significant barriers to entry and do not provide the tools necessary to launch a successful business.

In partnership with ATDC at Georgia Tech and supported by the City of Peachtree Corners, Prototype Prime provides not only a physical office and maker space, but also educational series, mentors, venture capitalists and service providers to ignite successful startups. The facility’s location was strategically selected based on the city’s strong historical ties to the technology industry.

Considered the pioneer city of technology in Georgia, Peachtree Corners was first created to house high technology industries to employ, among others, engineer graduates from Georgia Tech. In the 1970 and 80’s, it was also home to one of Atlanta’s first high-tech success stories - Hayes Microcomputer Products, which created the Smartmodem. Today, the city is located just two miles north of Norcross, Georgia, which was recently named the 14th “most genius place in America” by Time Magazine.

“Peachtree Corners has a rich history in technology, giving birth to metro Atlanta’s technology industry in the 1970’s when it established Technology Park,” said Mayor Mike Mason, co-founder. “I’m confident Prototype Prime will ignite economic development through innovation, education and job creation – ushering in the next generation of our city’s technology legacy.”

For more information on Prototype Prime, to schedule a tour or apply to be a member, visit http://www.prototypeprime.com.

Prototype Prime provides access to education, tools, venture capitalists and more to help entrepreneurs launch their product and scale their business. Headquartered in Peachtree Corners, the pioneer city of technology in Georgia, Prototype Prime is an unmatched resource for the startup community. Partnering with ATDC at Georgia Tech and supported by the City of Peachtree Corners, the incubator enables thinkers and visionaries to come in with an idea, and leave with a profitable venture. To learn more, visit http://www.prototypeprime.com or follow us on Twitter @PrototypePrime.