The 11th Annual National Cat Day is Just Around the Corner

The day that nearly implodes the internet is ready to pounce on October 29th! 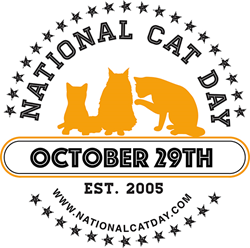 Cats were a huge part of my heart my whole life and I believed they deserved just as much attention to their wondrous qualities, as well as their plight in shelters and on the streets, and thus, another holiday was born

The world’s biggest cat party is just around the corner on Saturday, October 29th. Presented once again by Blue Buffalo and Petco, National Cat Day is, to cat loving humans, what catnip is to cats. Sprouting in 2005 from the success seed of National Dog Day, founded by Pet and Family Lifestyle Expert, Author and Animal Welfare Advocate, Colleen Paige, National Cat Day is now equal in popularity, not only the holiday aspect, but the worldwide love shown for cats and the significance expressed of them as best friends and fur kids. The dog is no longer man’s only best friend. In fact, it’s widely believed that cats rule the world. That may or may not be true, but one thing is for sure, they certainly rule the internet on October 29th.

“When I created National Dog Day in 2004, dogs were simply more popular on social media than cats and there was more attention given to their plight in shelters. When I witnessed the extraordinary power of National Dog Day to save lives, I knew that I had to create the same mission for cats. The first eleven years of my life, we had only cats as pets in our family and they brought me so much joy. It also seemed like such a natural pairing, since the first animal I rescued was an injured Bengal cat when I was five. Cats were a huge part of my heart my whole life and I believed they deserved just as much attention to their wondrous qualities, as well as their plight in shelters and on the streets, and thus, another holiday was born”, said founder Colleen Paige.

National Cat Day 2015 practically imploded the internet, trending #1 worldwide all day on Twitter, as well as trending on Google, Instagram and Tumblr. Every year, a myriad of A-list Cat Day supporters swarm social media, celebrating with photos of themselves cuddling their beloved cats. One celebrity in pawticular who really helped launch National Cat Day to new heights, is Taylor Swift, who celebrated National Cat Day on ABC’s The View in 2014, giving her feline loving fans a closer look into the lives of her adorable kitties, two Scottish Folds, Dr. Meredith Grey and Detective Olivia Benson.

This year will kick off with a the “PURRfect PURRsonalities” photo contest, depicting cats showing off their most unique purr-sonality trait. Three grand prize winners will receive a plethora of Blue Buffalo products and gear, as well as National Cat Day merchandise. Holiday highlights will include adorable cats for adoption on the Cat Day website from Helen Woodward Animal Center in Orange County, California and a stellar Cat Day celebration will take place at all Petco and Unleashed (by Petco) stores across the nation.

“It is with great pride that Blue Buffalo partners with Colleen's team and Petco again on National Cat Day. This is a celebration of the unconditional love and affection that cats provide. It’s also an opportunity for us to draw attention to shelters that have so many pets available for adoption, which is especially important to all of us as we head into the holiday season.”

To cap off the day in true cat-style, Andrew Lloyd Webber’s CATS on Broadway, join the party this year as a partner. The record-breaking musical spectacular has captivated audiences in over 30 countries and 15 languages. Based on T.S. Eliot’s “Old Possum’s Book of Practical Cats,” this wonderfully imaginative show features breathtaking music, including one of the most treasured songs in musical theater — “Memory.” Winner of 7 Tony Awards® including BEST MUSICAL, CATS tells the story of one magical night when an extraordinary tribe of cats gathers for its annual ball to rejoice and decide which cat will be reborn. Featuring a cast of beautiful dancers and singers and the original Tony-winning sets and costumes, this beloved hit is still Broadway’s most unforgettable event.