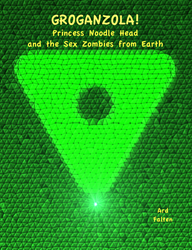 In the science fiction comedy, "Groganzola! Princess Noodle Head and the Sex Zombies from Earth", the author wraps a zany adventure around a theory that Earthlings are doomed because many of us, especially men, flood the side of the brain where generals, accountants, and scientists work with energy that's meant to stimulate pleasure and reproduction.

Here are some symptoms, varying according to genes, environment, left brain right brain interaction, and other factors woven into the story:

AUTHORITARIANISM AND FEAR: Where logic is done, that impatient sex energy wants quick easy answers to end the thinking. Psychologists point out that a defining characteristic of authoritarians is their need for certainty. They have a high 'Uncertainty Avoidance Index', or UAI. Since life is complicated and unpredictable and full of uncertainty the need for certainty produces stress and fear. Fear builds until certainty becomes more important than truth. It so happens that the 'best' authoritarian leaders project royal certitude - they are never wrong, promise order, and paint the world in simple black and white.

MISOGYNY: A stranded alien explains to some state troopers how anatomical differences may make the symptoms worse for men, turning women into a source of uncertainty to be objectified and controlled. In the left side of the brain beauty and pleasure are measured with numbers.