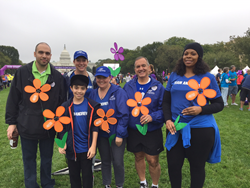 Andrews Federal Credit Union served as a proud sponsor of the 2016 Walk to End Alzheimer’s in Maryland and the District of Columbia this year. Recently, the Andrews Federal DC Nationals team, comprised of branch and headquarters staff, along with Chief Retail Officer, Oma George, joined forces to walk for this worthy cause.

Held annually in more than 600 communities nationwide, the Alzheimer's Association Walk to End Alzheimer’s® is the world’s largest event to raise awareness and funds for Alzheimer’s care, support and research. Every dollar raised benefits those affected by Alzheimer’s disease.

“We are honored to sponsor and participate in an event that impacts the community we serve,” said Andrews Federal’s Oma George, Chief Retail Officer. “We understand Alzheimer’s affects many families, and we want to do our part to raise awareness and help find a cure.”

Andrews Federal Credit Union was founded in 1948 to serve the needs of military and civilian personnel by providing a vast array of financial products and services. With over $1 billion in assets, Andrews Federal has grown to serve more than 117,000 members in the District of Columbia, Joint Base Andrews (MD), Springfield, Virginia (VA), Joint Base McGuire-Dix-Lakehurst (NJ), and military installations in central Germany, Belgium, and the Netherlands. In addition, the Credit Union serves as a financial partner with many select employee groups in Maryland, the District of Columbia, and New Jersey.