Airport Revenue News is pleased to announce that Thella Bowens, president and CEO of San Diego International (SAN), has been named its 2016 Director of the Year in the large airports category. 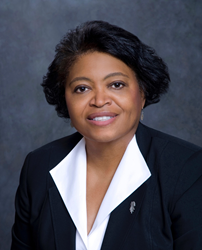 Airport Revenue News is pleased to announce that Thella Bowens, president and CEO of San Diego International (SAN), has been named its 2016 Director of the Year in the large airports category.

“Thella Bowens brings more than two decades of experience in the aviation industry,” says Ramon Lo, publisher of ARN. “It is a career filled with tremendous achievement – most notably the high-profile Green Build terminal expansion at SAN – and long-standing commitment to the airport industry overall. ARN is honored to recognize her as our Director of the Year in the large airports category.”

In 1996, when the San Diego Unified Port District operated the airport, Bowens served as the Port’s senior director of aviation. From September 2001 through December 2002, she served as interim executive director/president of the newly created San Diego County Regional Airport Authority.

Since 2003 Bowens has served as the leader of SAN. One of her most high-profile achievements was the completion of SAN’s Green Build terminal expansion in 2014. The Terminal 2 expansion, with a budget of nearly $1 billion, was the first LEED Platinum-certified commercial airport in the world. Bowens is an industry leader in infrastructure sustainability, and in 2008 instituted a policy requiring all SAN projects to be built to LEED Silver standards or better.

Bowens is extensively involved in Airports Council International-North America. She served three three-year terms on the Board of ACI-NA and one year as Chair, beginning in October 2011.

Prior to her time in San Diego, Bowens served as deputy executive director of the Kansas City Aviation Department as well as the budget administrator for Dallas/Fort Worth International (DFW).

“I truly appreciate being named a Director of the Year by Airport Revenue News,” says Bowens. “Throughout my career I have had the privilege of working alongside some of the most talented individuals in the industry, for which I am grateful. It has been an honor to play a role in turning San Diego’s airport into both a leader within the industry and a world-class destination for the region.”

Bowens will be interviewed in and featured on the cover of ARN’s December/January issue. She will be presented this award at the ARN Awards Show on the final night of the ARN 2017 Revenue Conference & Exhibition in New Orleans.

Want to know more about ARN? Interested in doing business in airports? ARN is the source for news and insights on the airport concessions industry. For more information, please visit airportrevenuenews.com.