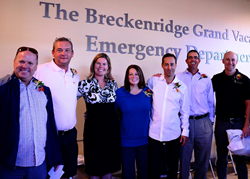 The Breckenridge Grand Vacations Executives (pictured here) will be welcoming Blake Davis to their team in November of 2016.

"Mike and I are eternally grateful for the commitment that everyone has made to BGV. We are very lucky to have these leaders in our company,” stated BGV CEO, Mike Dudick.

More than 30 years ago, BGV was founded by brothers Mike and Rob Millisor, with help from business partner and friend, Mike Dudick. The company’s incredible success has impacted not only the timeshare industry, but the local community as well. BGV’s success is measured by the positive impact the company has on: owners and guests, employees and the community.

In October of 2015, BGV experienced a terrible loss with the sudden passing of Rob Millisor, while he was on a humanitarian trip in Nepal. Over the past year, BGV realized changes would need to be made to keep the company strong and moving in the right direction. Some of these changes are being implemented currently via responsibility shifts and additions at the Executive level.

BGV’s Co-Owner and Developer Mike Dudick has returned to Summit County full-time with his family and has taken on the role of BGV’s Chief Executive Officer. He is also serving his second term on the Breckenridge Town Council.

BGV Co-Owner and Developer Mike Millisor will remain involved with BGV’s daily decisions, but is living nearly full-time with his family in Maui. As the founder of the company and an integral part of the BGV Executive Team, Mike’s guidance and support will continue, albeit remotely.

Dave Stroeve has been promoted to BGV’s President of Sales, continuing to oversee all aspects of the company’s timeshare sales. Dave has successfully led the BGV Sales Team for nearly 20 years and his dedication and commitment have contributed to the overall growth and success of BGV.

Nick Doran, who recently celebrated his tenth anniversary as BGV’s Chief Financial Officer, will be expanding his responsibilities as Chief Operating Officer. In this new position, Nick will work in concert with the entire Executive Team, and will be responsible for all day-to-day operations of the company.

BGV is thrilled to welcome Blake Davis as the new Chief Financial Officer, effective in November of 2016. Blake leaves his position of President at FirstBank of Summit County, where BGV has worked closely with him throughout the years. Blake brings 23 years of commercial banking experience to BGV. He has been an active member of the Summit County community for over two decades and serves as a board member with the Summit Foundation.

BGV will undoubtedly continue to excel under the steadfast leadership of the rest of the Executive Team: Ginny Vietti, Kimberly Tramontana, Mike Hayes and Brian Binge. As BGV grows, the entire company remains committed to serving the BGV family, our local community and to delivering “Always Grand Vacations” to our owners and guests.

About Breckenridge Grand Vacations
Created in 1984, Breckenridge Grand Vacations (BGV) was built by brothers Mike and Rob Millisor and friend Mike Dudick upon the belief that the success of their company would be determined by the positive impact it had on their owners and guests, employees and the community. The developers of the company also embraced the concept that BGV would be the best in sales if they were first and foremost the best in customer service. The company has embraced the Net Promoter methodology company-wide and consistently beats industry averages with its high scores. BGV now creates Grand vacations for over 23,000 owners and employs over 500 staff members. Sadly, Rob Millisor passed away in October, 2015 while on a humanitarian visit to Nepal. His example and service to the needs of others remains a strong focus with BGV’s leadership and staff. He is greatly missed and his legacy of success and giving continues.