OxBlue Corporation, a leading construction webcam service provider, has announced its latest round of enhancements to the solar power units that support OxBlue construction cameras, including batteries and solar panels that are smaller, lighter and easier to install. 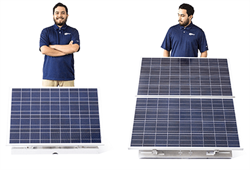 OxBlue Corporation, a leading construction webcam service provider, has announced its latest round of enhancements to the solar power units that support OxBlue construction cameras, including batteries and solar panels that are smaller, lighter and easier to install.

Solar panel size reductions of approximately 25 percent and a similar percentage decrease in the weight of energy-storage batteries used in OxBlue’s solar power units are among the improvements. Additionally, a recent redesign of the mounting system has made solar panels significantly easier for customers to install and lock into place.

Driving the enhancements are continual advancements in technology. OxBlue’s success in obtaining upgraded components with a lower power draw has, in turn, allowed the company to considerably lower the power consumption of the OxBlue construction camera system—thus requiring smaller, more user-friendly solar panels and batteries.

“With solar, as with all of our products, we strive continuously for improvements that make things easier for our clients, with products that are responsive, reliable and cost effective,” said OxBlue CEO Chandler McCormack. “Our solar units are increasingly becoming more modular, smaller and faster to deploy.”

OxBlue released its first line of solar-powered equipment more than ten years ago and has continued to refine and develop the technology. New versions include solar products designed to power OxBlue construction cameras from smaller, more deployable units to larger turnkey solar trailers, which include 30-foot telescopic poles. Many OxBlue solar units are deployed at project jobsites where power is not yet available or where solar is the most convenient power source.

In 2015, Constructech magazine awarded OxBlue its Connected Hardware Award, citing OxBlue construction webcams as “one product that stood out above the rest.” OxBlue also earned a spot on the 2015 Constructech 50, the magazine’s annual listing of the most influential companies whose technologies serve the construction industry.

“Even with our leading products, we continue to invest based on our clients’ needs and in ways that provide real value for them,” McCormack said. “We take pride in being client oriented, value oriented and service oriented.”