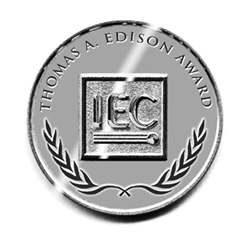 The IEC has paid tribute to the dedication and work of eight leaders of the IEC family who, through their outstanding commitment and expertise, have contributed to making products and electrical systems safer, more energy efficient and more compatible.

The IEC (International Electrotechnical Commission) has paid tribute to the dedication and work of eight leaders of the IEC family who, through their outstanding commitment and expertise, have contributed to making products and electrical systems safer, more energy efficient and more compatible.

At the IEC 80th General Meeting in Frankfurt, the following were recognized with the 2016 Thomas A. Edison Award:

The Thomas A. Edison Award is in the spirit of Thomas Alva Edison, 1847-1931, one of the greatest inventors in history. Edison developed a system of electric power generation and distribution which was a major development in the modern industrialized world. His over 1,000 patents included improving the incandescent lamp, film projection and sound recording, which still have an impact on our daily lives. “Genius is 1 % inspiration and 99 % perspiration” is one of Edison’s most famous quotes.

Robert Arsenault, Secretary, TC 4
Robert Arseneault has been Secretary of IEC TC 4, Hydraulic turbines, since 1992, when Canada took over the responsibility of the Secretariat. He was particularly instrumental in the publication of dual logo standards like IEC/IEEE, where the coordination of editing, comments and planning are essential. Arseneault excels in fostering the exchange of ideas between people from different cultures. In the last five years, Arsenault worked closely with the Chair of TC 4 to launch two new working groups, MT31 on Turbine residual life and WG33 on pressure fluctuations. Arsenault is also constantly promoting the IEC through presentations at international conferences (recently at HydroVision) and through his contributions to articles about the work of IEC TC 4.

Giovanni Cassinelli, Secretary, SC 23E, Italy
Giovanni Cassinelli has served as Secretary of SC 23E, Circuit-breakers and similar equipment for household use, since January 2003. He strongly supports the TC Chair in smoothly solving conflicts and maintaining a cooperative environment. Cassinelli has helped ensure highest quality results in the development, editing and translation of SC 23E documents. His contributions led to 23 new publications, including new IEC International Standards and amendments of existing ones, and over 400 official SC documents. He played a crucial role in the successful implementation of a new Blocks and Modules approach in the structure of SC 23E Standards, aiming at harmonizing a family of standards, thus avoiding mistakes, inconsistencies or discrepancies.

Marie-Elisabeth d'Ornano, Chair, IECQ, France
IECQ Chair since 1 January 2014, Marie-Elisabeth d’Ornano has embraced her role, responsibilities and duties with enthusiasm and a dynamic hands-on approach. In this role, she has had the strong support of her employer, LCIE – a Bureau Veritas company. IECQ has been reinforced as an international “best practice” model for supplier assessment and as an extremely valuable Supply Chain Management tool for the many industries involved in the manufacture, supply and distribution of electrical/electronic components, parts and assemblies.

During her initial term as Chair, IECQ has benefited from d'Ornano’s leadership as illustrated in a number of key initiatives and achievements:

Geoffrey S. Ibbott, Past Chair, SC 62C, United States
During his term as Chair of IEC SC 62C, Equipment for radiotherapy, nuclear medicine and radiation dosimetry, Geoffrey S. Ibbott outstandingly promoted the development and recognition of IEC Standards for medical radiation therapy equipment, nuclear medicine and radiation measurement. Ibbott successfully encouraged various experts and stakeholders from industry, medical physics and regulatory bodies to join the Committee. About 20 IEC publications have been issued under his leadership, and these have been widely accepted in the regulatory environments of EU, US, China, Japan and other jurisdictions. As a result, IEC is highly recognized as a home for standards in the field of medical equipment publications for radiation therapy, nuclear medicine and radiation measurement.

Yoshiaki Ichikawa, Chair, TC 11, Japan
Dr Yoshiaki (Yoshi) Ichikawa has led environmental standardization in TC 111 Environmental standardization for electrical and electronic products and systems for 11 years, since its establishment in 2004. He served as the Convenor of WG2 Environmentally Conscious Design (ECD) and published IEC 62430 Environmentally conscious design for electrical and electronic products. For this contribution he received the 1906 Award in 2007. In 2009, Ichikawa was appointed as the Chair of TC 111. TC 111 has published 18 deliverables to date, in the fields of chemical, eco-design, greenhouse gas and resource efficiency. Most of these have been integrated into legal frameworks specifying product environmental aspects around the world through which the electrotechnical industry has gained benefits. Ichikawa's activities also extend to other fields. He is an expert of IEC TC 62 Electrical equipment in medical practice, where he is supporting the Convenor of PT 62926, addressing the systems aspects of real-time radiation therapy.

Maurice Montavon, Secretary, TC 5, Switzerland
With his personal engagement during the last 44 years Maurice Montavon has devoted countless hours to IEC. In 1972, Montavon was designated as expert by the Swiss NC for the first time – to WG 1 of TC 5, Steam turbines. From 1982 to 1984 he was involved in the publication IEC60045-1. Montavon has been Chair of the Swiss Mirror Committee TC 5 for almost 30 years. In 2007 he was elected by SMB as Secretary of TC 5, succeeding in the reactivation of TC 5 in 2008.Today TC 5 has 4 MTs and 2 WGs, with more than 70 experts. In the area of cogeneration he has recently also achieved a collaboration with ISO following the advice given by SMB. During his career Montavon always promoted international standardization within IEC and used his network to bring new experts into TCs, not only from Switzerland but also from other countries where he worked. Montavon founded the Swiss Mirror Committee of TC 117 Solar thermal electric plants, as Chair in 2011 and he acts as liaison officer between TC 5, TC 117 and TC 120.

Bernd Sisolefsky, Past Chair, CISPR CIS/B, Germany
Dr Bernd Sisolefsky, former Chair of CISPR, the International special committee on radio interference, is an experienced EMC expert who has been active in IEC work since the early 1990s. During the last 25 years he has made countless contributions and held several offices in technical bodies under the CISPR roof. These include the role of Chair of CISPR/SC B from 2006 to September 2015. CISPR/B is responsible for standardization in the field of radio interference suppression of industrial, scientific and medical radio frequency equipment and also of high voltage lines and installations. During this period, the International Standard CISPR 11 was advanced two times, which culminated in the addition of requirements for grid connected power converters (GCPC), which serve for the connection of photovoltaic systems to the electricity distribution network. The addition of further requirements for wireless power transfer (WPT) devices was also started when Sisolefsky was Chair. Finally he also worked constantly within other technical bodies of CISPR, in particular in CISRP/F, which is responsible for radio interference suppression of household and similar electrical appliances and of lighting equipment, and in CISPR/I especially in the field of radio interference suppression of powerline telecommunications equipment.

About the Thomas Edison Award
Created in 2010, the Thomas A. Edison Award recognizes exceptional achievement (within the past five years), dedicated service and significant contributions to the IEC through the effective management of committees of currently active TC/SC Officers (Chair, Secretary or Assistant Secretary of a Technical Committee or Subcommittee) and officers of the IEC Conformity Assessment Systems and their subsidiary bodies.

Officers of a conformity assessment system or subsidiary body must have:

The IEC Thomas A. Edison Awards are presented by the Vice-Presidents or Chair of the respective SMB or CAB boards, at the meetings held in conjunction with the General Meeting, or on another suitable occasion.