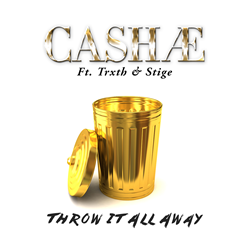 CASHÆ is currently seeking press opportunities, interviews, features, and more. They can be reached through their official website.

About CASHÆ: DJ DUO PRODUCERS, Abomb and Joseph Michael met in a sound recording class Spring of 2014, while attending Miami Dade College. Abomb introduced himself after overhearing Joseph Michael singing and playing his own rendition of 'Santeria' by Sublime on the piano. Recognizing each other's true talent and potential to be business partners, they expressed a mutual interest in collaborating. Once in the studio, the vibe between them musically and personally was undeniable. Three months later, Abomb and Joseph Michael joined forces to open their own studio. The bangers began to flow unstoppably. With sounds and skill sets complementing each other so effortlessly, they decided to make the collaboration official in 2016. Joseph Michael would sing and produce, while Abomb would produce and rap. Together, they named the new DJ duo CASHÆ.

CASHÆ fuses together two of the most popular music genres, underground rap and EDM, to cater to today's Millennial and Gen z demographics. Their unique sound weaves and marries together multiple cultures at once, providing a global appeal to the masses. Through this sheer rhythmic perfection, critics have coined it as the future of Miami sound: Tropic Trap. CASHÆ'S most recent musical collaborations include SMLE, Boobie Black, Tory Lanez and Kevin Gates.