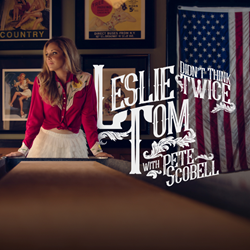 With this generation of men and women quickly passing away, I wanted to craft a song that told their story but that other veterans and active-duty service men and women could relate to as well.

Denver-based country singer-songwriter Leslie Tom is scheduled to release her next single, “Didn’t Think Twice,” on Veteran’s Day, November 11, 2016. The song is a moving tribute to her grandfather, Milton Smallwood Alexander, and his service during World War II in Normandy, as well as a document of the sacrifices those serving tours of duty in our armed forces still make today on behalf of their country. “Didn’t Think Twice” is the first single from Tom’s forthcoming EP, entitled Leslie Tom, which is scheduled for release February 17, 2017.

“When I began working on my third studio project, a tribute to my grandfather and his service to our country was important to document in a song,” Tom says. “I wanted to write a song loosely based on his experience with WWII. With this generation of men and women quickly passing away, I wanted to craft a song that told their story but that other veterans and active-duty service men and women could relate to as well.”

Co-written with Billy O’Rourke, the song was produced by John Macy (The Nitty Gritty Dirt Band, Richie Furay, Los Lobos) and features singer Pete Scobell (of Pete Scobell Band) dueting with Tom. Scobell is a Naval Academy graduate and an ex-Navy SEAL who became a musician and had an iTunes chart-topping song with Wynonna Judd (“Hearts I Leave Behind”) featured in “American Sniper,” the film about Scobell’s Navy SEAL teammate Chris Kyle’s life. A video to accompany “Didn’t Think Twice” will be released the same day as the song.

All proceeds from the sale of the single will benefit veterans in the form of donation to the Travis Manion Foundation (http://www.travismanion.org), a non-profit organization whose mission is to empower veterans and families of fallen heroes to develop character in future generations. To celebrate the upcoming release of her single, Tom attended the Foundation’s 10th anniversary event in Washington D.C. on October 29th, where she entertained the crowd with two patriotic songs, including “Didn’t Think Twice.” Rounding out the weekend, she ran in the Marine Corps Marathon in Washington D.C. on October 30th, where she accomplished a personal marathon record run-time and raised over $1000 for the TMF. Says Tom: “I think the weekend was one of the most impactful of my life. All of the blood, sweat and tears that I’ve poured into this project have been worth it since it is making a difference for the lives of veterans and their families.”

From the first few notes of a Leslie Tom song, you’re instantly taken back to a time when singers like Patsy Cline and Loretta Lynn were winning the hearts of country music lovers everywhere. But keep listening, and you’ll hear a voice and a sound that are remarkably current, even timeless. Combining relatable lyrics with her bubbly, sassy personality and an unmistakable voice, along with fiddle and pedal steel guitar, Tom puts her own traditional-modern spin on country music.

Born and bred in the heart of Texas, she cut her teeth listening to Hank Williams, Patsy Cline and Bob Wills on the radio of her father’s pickup truck. Her own musical journey began at age 7, picking up the violin and clarinet before settling on piano, and eventually developing her vocal skills and songwriting chops. Since those early beginnings, music has been an inescapable force in her life. In the years since, Leslie has sung on stage in front of tens of thousands of people, appeared on television music competitions, released two critically acclaimed studio projects and performed for enthusiastic audiences around the world. Her musical journey has taken her from the honky-tonks of south Texas to a stint in Nashville, then back to Texas, before settling in Colorado in 2014.

Tom’s forthcoming self-titled EP was recorded at Cinderella Studios in Nashville, the oldest surviving independent studio in the Music City, and produced by John Macy. It is scheduled for release February 17, 2017. Says Tom about the EP: “I want people to realize that country music in the true sense of the definition is still very much alive and well. I’m more proud of this EP than I’ve felt about any piece of work I’ve shared. I have nothing left to prove. These songs are the stories of my life written without worry if I’ll fit in to what is being played on mainstream radio and celebrated by today’s ‘country’ fans. This is me… all me.”