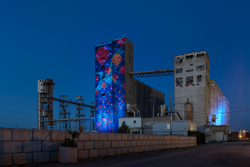 Now in its fourth year Illuminate SF Festival of Light shines a light on 35 dramatic, eco-friendly light art installations — nine more than last year and more than four times the number of the inaugural celebration in 2013 — accessible by public transport and free for all. From Thanksgiving 2016 through New Year’s Day 2017, art lovers are invited to embrace the power of light and tour San Francisco’s art installations by a diverse range of local and world renowned light artists. Illuminate SF Festival of Light, presented by the San Francisco Travel Association, has grown to include intimate artist talks, museum tours and a myriad of other light art activations across the city.

“San Francisco is the apex of technology and culture,” said Joe D’Alessandro, president and CEO of the San Francisco Travel Association, “It is our hope that visitors not only get to experience the sparkle of The Bay Lights, but the truly vibrant gallery of light that is San Francisco.”

The 39-day celebration offers the rare opportunity to connect with local artists, with the addition of artist talks, Museum Saturdays, neon light tours and a stargazing party in the Presidio during the longest nights of the year. These complimentary tours, talks and participatory experiences will once again highlight the newest permanent and temporary installations. This, all in addition to the city's crown jewel, Leo Villareal's, The Bay Lights, now permanent and dazzling and best viewed when the sun sets just before 5 p.m. throughout December.
The works come to life at dusk throughout 12 San Francisco neighborhoods with a luminescence that will turn any evening into an illuminating adventure, especially when combined with exploring San Francisco’s world-class restaurants, museums and cultural events. The light art can be found throughout the city in neighborhoods in the Embarcdero along the waterfront, in North Beach, Civic Center, Central Market, the Inner Sunset, SoMa, Potrero, Mission Bay, Bayview, Golden Gate Park, Hayes Valley, the Mission District and even flying in or out of San Francisco International Airport (SFO).

Museum Saturdays –
Docent-led tours of light art within museums every Saturday in December. Check with museums directly for tour times and details.

Stargazing Party in the Presidio –
December 3, 2016, 7 p.m.-9:30 p.m. at the Presidio Main Parade Ground. Presidio Stargazing Parties are perfect for families and people of all ages interested in seeing the universe through a telescope. The San Francisco Amateur Astronomers bring telescopes and amateur astronomers to guide you, unveiling some of the night sky's most interesting astronomical beauties. See the moon, planets, nebulae and galaxies up close and learn some of the constellations at a star tour. Bad weather cancels. For registration and information visit http://www.presidio.gov/events.

Three Free Guided Walking Tours, escorted by the Cultural Concierge –
Wearing steampunk-inspired, illuminated capes and hats, these ambassadors for the arts made their debut at Super Bowl City earlier this year. During Illuminate SF Festival of Light, they will join the three free light art walking tours:

There are 19 permanent light artworks within the city’s 49 square miles, including:

Illuminate SF and Illuminate SF Festival of Light are presented by the San Francisco Travel Association in collaboration with local civic, arts and cultural partners.

For details on the artists and installations celebrated in Illuminate SF, visit http://www.sftravel.com/media.

The San Francisco Travel Association is the official destination marketing organization for the City and County of San Francisco. For information on reservations, activities and more, visit http://www.sftravel.com or call 415-391-2000.

American Express® is the official Cardpartner of the San Francisco Travel Association.

Note to editors: Press releases and other media resources are available at http://www.sftravel.com/media The San Francisco Travel Photo Video Library is available at http://barberstock.com/sanfranciscotravel. For news and story ideas, follow @SFMediaRelation on Twitter and @OnlyinSF on Instagram.