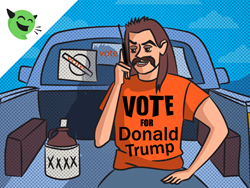 What better way to take the edge off by making each other laugh, regardless of political affiliation or beliefs. We really hope people enjoy these pranks and understand that humor is our oldest and most powerful language.

KickBack, Inc, developer of PrankDial, the largest for-entertainment prank calling app on iOS, Android, and Web launched two new pranks this weekend lampooning Tuesday’s hotly contested presidential election. Vote for Donald Trump and Vote for Hillary Clinton let eager voters send calls from what appears to be an ardent Trump or Clinton supporter urging others to support their beloved presidential candidate before the big day. The recorded pranks begin by taking a benign and congenial tone, but slowly the recorded supporter becomes increasingly jingoistic and strongly questions the individual’s patriotism. Using PrankDial’s SmartResponse technology, the supporter starts and stops his passionate plea according to the response of the individual on the other end of the line, and will undoubtedly be the cause of some healthy laughs. Both pranks are an inspired caricature of each candidate’s campaign, with lines like “if you ain’t voting for Trump, then you’re not a real American,” and “if you really love your country, then you’d vote for Miss Clinton” Each prank has already been sent and enjoyed thousands of times, with many of the energetic reactions posted in the PrankDial app and on the website.

With many people around the country having said they lost friends due to the election, the goal of the new pranks is to interject some fun and humor into what has become a clearly contentious election cycle.

“It’s been such a long and mean spirited election season,” said Fahim Saleh, the Founder and CEO of KickBack. “What better way to take the edge off by making each other laugh, regardless of political affiliation or beliefs. We really hope people enjoy these pranks and understand that humor is our oldest and most powerful language.”

PrankDial, founded in 2010, has completed over 200 million calls and produced endless laughs all around the world. Consistently ranked among the highest grossing entertainment apps, PrankDial re-launched in October with a better layout, more pranks, and improved functionality.

“Our core mission is to remind the world that some of the earliest human communications were simple jokes, and we hope to keep that spirit alive, even in tough times like this election season,” Saleh said.