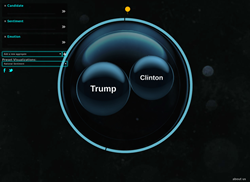 Still from LIVE by Zoic

On November 8, at 12:01 am ET, Zoic Labs will activate an unprecedented new way to track the most controversial US presidential election in history. The app, dubbed “LIVE by Zoic,” is the first of its kind to put real-time, powerful, big-data and sentiment analysis in the hands of everyday Americans. L.I.V.E., for Live and Interactive Voter Emotion, is intuitive, easy to use, and provides infinite personal customization.

Biz Stone, Twitter Co-founder and Zoic Advisory Board Member said, “On November 8th, activity on Twitter will spike—likely to record levels. LIVE by Zoic enables citizens to put their finger on the pulse of what people are really thinking and consequently, Tweeting. This isn’t polling data, it’s real people, expressing their real thoughts and it’s the closest we’ll get to having a crystal ball.”

LIVE by Zoic is available to everyone at live.zoiclabs.com. Use it to interactively customize aggregations of Tweets about Trump and Clinton, by sentiment, emotions, state, age and gender. Notes Zoic Labs President Tim McBride, “We encourage all Americans to move beyond static and often critiqued polling data to follow Election 2016 using LIVE by Zoic’s customizable visualizations of the election sentiment and opinions of U.S. citizens.”

Zoic Labs is an advanced visualization company focused on the intersection of big data, narrative, design, and emerging technologies.

Since 2002, we have developed software and virtual production tools for Zoic Studios, a multi-platform storytelling company with emphasis on high-end computer graphics for film, television, and gaming.

ICG is a Maryland-based corporation specializing exclusively in real-time streaming analytics and the development of the LUX platform. The core technical team behind ICG was purposefully recruited and assembled because of each member’s experience with engineering real-time systems. The team has been together for more than five years and represents some of the best talent and expertise in the world for applying technology to the big, fast moving data problems emerging today. For more information, visit: http://www.icgsolutions.com.