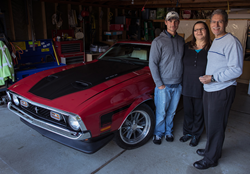 The AMSOIL Devoted to Protection™ Sweepstakes was announced at the 2015 SEMA Show in Las Vegas, with the grand prize of a fully restored 1972 Ford Mustang Mach 1 being handed to one lucky winner in October 2016. Out of thousands of entries received, AMSOIL is pleased to announce George E. out of Detroit as the recipient of this American classic.

“As people who love cars, finding and modifying a vehicle like this has been fun,” said Erica Danielski, director of integrated marketing for AMSOIL. “We liked the selection of this particular Mustang because 1972 was a defining year for our company. That was the year AMSOIL chairman Al Amatuzio founded AMSOIL, on the same principles that defined his career as a jet fighter squadron commander – high-performance, superior quality, excellence and strong leadership.”

The Mustang has been delivered and will soon be seen on the road with George behind the wheel. Three first prize winners received $500 in AMSOIL products to keep their own vehicles running peak. AMSOIL congratulates the following first prize winners:

View full coverage of the build stages, unveiling and delivery to its new owner at http://www.amsoil.com/musclecar.

About AMSOIL: AMSOIL has been the recognized leader in synthetic lubrication since 1972. For more information about AMSOIL synthetic lubricants and performance products contact your nearest AMSOIL distributor, visit http://www.amsoil.com or call AMSOIL at (715) 392-7101 or 1-800-777-8491. AMSOIL INC., AMSOIL Building, Superior, WI 54880.