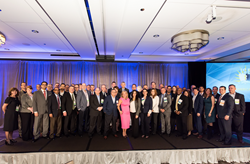 “We were amazed by the accomplishments of our executive and project nominees,” said Marci McCarthy, CEO and president, T.E.N. “The executives nominated include the industry’s brightest minds and many of the projects are game changers. This year’s nominees represent the future of security innovation.”

Academic/Public Sector Category
Medha Bhalodkar is the Chief Information Security Officer of Columbia University and has served as the university's first CISO since 2006. Medha has over 25 years of experience in various aspects of Information Technology, Security, Auditing and Risk Management, spending over 15 years in the Financial Industry and over 10 years in the Education and Healthcare industry. She is a recognized Risk Management and Information Security professional and serves on a number of governing bodies, steering committees of professional organizations and is a frequent panel speaker at major NY conferences. Medha has a number of security certifications (e.g., CISA, CGEIT, CRISC, CICA, ITIL, and Cloud Security Certifications) and a B.S. from Bombay University. Medha is proud of her role as a woman in IT and strives to mentor and guide young women this profession.

The “Perimeterless Network Security” project, submitted by Columbia University, was selected as the ISE® North America Project of the Year in the Academic/Public Sector Category. This project achieved our prime goal of providing information security where needed, at the same time support the basic mission of the University of sharing of information in an open network to promote exchange of ideas and research. Columbia University is a blend of Corporate and ISP elements that as such, requires a security structure that covers these requirements. We also have strict security requirements for protecting our intellectual property and applications such as payroll, human resources, financial and student records. Our goal in implementing this project was to improve our security posture by leveraging implementation of CUIT’s Converged Infrastructure project, while it was being designed, developed, and deployed, and support university mission to allow free exchange of information.

Commercial Category
Bill O'Hern, Senior Vice President and Chief Security Officer for AT&T, was selected as the Information Security Executive® of the Year Award winner in the Commercial Category. His twenty-year career at AT&T has been primarily focused on networking and information security, with a particular focus on innovative security platforms within AT&T's Enterprise, Commercial and Federal Government environments. Bill helped build the first scalable internal Threat Management System currently used by AT&T to monitor and defend its network and computing infrastructure; he is also the lead for our Security Virtualization and Software Defined Network (SDN) approach. In addition, Bill previously had responsibility for our AT&T Security Policy and Requirements, Penetration Testing, Security Architecture and Risk Management functions. He is responsible for the strategic thought leadership and technology evolution of AT&T’s capabilities, primarily focused on leveraging our vast global network and operational capabilities. This includes the migration to our next generation software defined networking efforts as well as our emerging services in iOT and Entertainment. Finalists included John Graham, Chief Information Security Officer of Jabil and Pritesh Parekh, VP & Chief Security Officer of Zuora.

The U.S. Bancorp’s project “U.S. Bank Enterprise Tokenization Integration Project” was selected as the ISE® North America Project of the Year in the Financial Services Category. U.S. Bank Enterprise Tokenization Integration Project is a highly complex development project that required mapping of data-flows between applications, partnership with multiple CIOs who had to change applications in specifically orchestrated sequences, and business process re-engineering to remove or reduce use-cases where business processes were formerly using real data that required significant protective controls around it. The result was a dramatic reduction in data that required protection. Finalists included the Suntrust Bank’s project “2015 DR Next Project”, Elavon’s project “SecurityON” and PayPal’s project “Enterprise Vulnerability Management Program”.

Luminary Leadership Award
Also honored during Tuesday’s awards program was the 2016 Luminary Leadership Award winner Jim Routh, Chief Security Officer for Aetna. Presented annually, the award celebrates the achievements of an outstanding leader and industry practitioner for his or her distinguished service, stewardship and contributions in advancing the information security industry.

About ISE® Award Program Series
For more than a decade, the Information Security Executive® (ISE®) of the Year Award Program Series has empowered security executives and their project teams to Connect, Collaborate and Celebrate. Recognized as the industry’s most prestigious IT Security award program, it has become the most anticipated award program for security executives and their project teams because it offers opportunities to benchmark against other leading security programs, while providing a channel for well-deserved recognition and visibility. Winners have included executives and project teams from leading organizations such as Nike, The Walt Disney Company, the United States Postal Service, Schlumberger, Texas Instruments, JPMorgan Chase & Co., Equifax, Comcast, PayPal, Northrop Grumman Corporation, and Nationwide.