Schmidt Ocean Institute announces the completion of an in-depth study of the ocean’s “skin”, the sea-surface microlayer, using specialized autonomous vehicles onboard of research vessel Falkor. 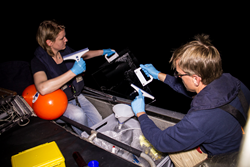 Even the latest models ignore what happens at the sea surface, we hope this research will change that helping to inform computer models to improve forecasts of climate change.

Schmidt Ocean Institute’s research vessel Falkor returns today with a diverse crew of scientists who have newly found characteristics of the ocean’s “skin” also known as the sea surface microlayer. These findings have important implications for understanding the ocean’s role in climate change and advancing broader understanding of ocean properties.

“The sea-surface microlayer plays a vital role in the uptake and release of greenhouse gases, including methane and carbon dioxide via the ocean,” said Chief Scientist Oliver Wurl from the University of Oldenburg. “Even the latest models ignore what happens at the sea surface, we hope this research will change that helping to inform computer models to improve forecasts of climate change."

The science team left Darwin, Australia 31 days ago and completed seventeen sampling stations along their transit, capturing several unique discoveries in the microlayer. Some of these surprising results came from the first air-sea investigation with a cyanobacteria bloom (a potentially toxic blue-green bacteria), as well as the discovery of widespread tiny copepods scattering in the layer (extremely tiny crustaceans), demonstrating a previously unknown distribution.

With the same thickness of a human hair, chemists, biologists, geologists, and oceanographers used sensors attached to a multitude of vehicles to better study the microlayer. A remote-controlled catamaran, unmanned aerial vehicle, and kayak were used to collect water samples and data from the atmosphere. The unmanned aircraft took off from research vessel Falkor, scanning the sea surface with hyperspectral cameras to measure ocean color and phytoplankton, as well as with highly sensitive thermal and optical instruments to measure the ocean’s surface skin temperature and the net energy crossing the ocean’s surface.

Co-chief scientist Christopher Zappa from the Lamont-Doherty Earth Observatory of Columbia University was pleased with the success of the unmanned aerial vehicles (UAVs), which had never flown over open ocean before. “It has been almost six years since the design of the instruments began,” said Zappa. “The vehicles and instrument payloads performed how they were supposed to, allowing us to gather some very interesting data of the ocean’s surface in high resolution.”

These specialized tools were deployed to explore trace metals, greenhouse gas exchange, wind and wave effects on air-sea transfer; and microbial communities. The team will now interpret and correlate these distinct but interconnected data sets. “This is no easy feat with over 400 water samples” said Co Chief Scientist Bill Landing from Florida State University. “This data set is the first of its kind, incorporating data from many disciplines."

Nur Ili Hamizah Mustaffa applies high concentrations of salt to break the ionic interaction that attaches to cellular walls. This way she is able to effectively measure the amount of the enzyme in pho