The Best Payroll Software According to G2 Crowd Fall 2016 Rankings, Based on User Reviews 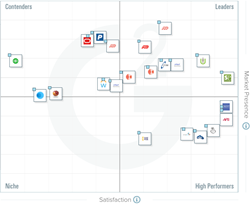 -Importance of Administration — Multiple users stressed the importance of quality administration features including check and W-2 printing and delivery, pre-tax deductions, and direct deposit. These features received a satisfaction rating higher than 90 percent overall, with 5 products receiving a satisfaction score of at least 95 percent in these areas.

-Head in the clouds — Of the 22 products in the Fall 2016 Payroll Grid Report, 82 percent are cloud-based, resulting in both positive and negative reviews. Many users cited convenience of use as a big positive for working in the cloud, while others reported issues with functionality and support.

-Issues with Implementation — Similar to the Summer 2016 Payroll Grid Report, users experienced difficulties with the implementation process. Many users reported the high level of complexity, struggles with integrations, and unhelpful support as causes. Ease of Setup received the lowest category average of any main satisfaction rating at 79 percent, the same rating it received in the previous Grid Report.

About the Payroll Software Grid report: