Chris Fink, Who has an Intellectual Disability, Found His Place at Publix

In celebration of Thanksgiving, Vocational Rehabilitation shares a man’s journey to finding just the right fit for his job. 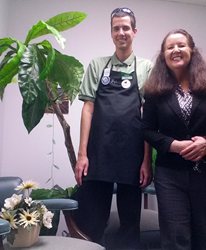 When Chris Fink stands at the entrance of Publix, eagerly greeting each person who walks into the store, he isn’t just doing his job — he’s enjoying the best part of his day. “I like greeting customers with respect and making them feel like they are loved,” he says.

Chris, who has an intellectual disability and Attention Deficit Disorder, is happy in his position at Publix, but he didn’t always enjoy his work. He’d held several jobs before, but found himself wanting more from his career — so he went to Vocational Rehabilitation, a federal-state agency that helps people with disabilities get or keep jobs.

AnnaMarie and Agnes first placed Chris in a job at a restaurant, but they quickly learned it wasn’t the right fit. “Chris was working as a dishwasher, which involved repetitive and simple tasks,” AnnaMarie explains. “We learned through watching him that he was capable of more.”

AnnaMarie noticed that Chris could balance several different responsibilities, and he enjoyed interacting with others. She and Agnes knew those traits would make him well suited for a position at Publix, where he would speak with customers while collecting carts, retrieving items from the stock room, and bagging groceries.

Chris began working at Publix, and it quickly proved to be the right fit. AnnaMarie believes his personality qualifies him for the position. “Chris is very personable. He has an infectious personality,” she says. “We just helped him turn those traits into employable skills.”

Chris’s success on the job can also be credited to the continued support he got from AnnaMarie and Agnes. “We talk openly about what he can do to improve and how he can make corrections,” AnnaMarie explains. “But in this job, where he is working in the right setting, there isn’t as much need for it.”

Chris is grateful for the opportunity to work and for the people who helped him along the way. “AnnaMarie is a very good counselor who helps people who are looking for work,” he says. “I would recommend her to anyone who can’t find a job, because she helped me find a job that I love.”

In the future, Chris hopes to continue working at Publix. He even plans to retire from the store – but not before he is first promoted to different departments. “I want to work in the bakery one day. I have a lot of friends who work there and they always want me to come over,” he says. “I have to tell them that I can’t yet, but I want to be there after I get promoted.”

AnnaMarie isn’t surprised by Chris’s ambition. “He is very capable,” she says. “With his personality, he will be successful no matter what.”