A Tribute to Muhammad Ali has over 170 photo/art images of the final and most important fight of his legendary boxing career and is now available at Amazon Books. 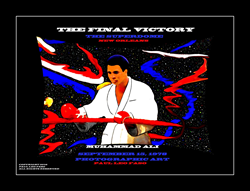 THE FINAL VICTORY - A Tribute to Muhammad Ali's Third Heavyweight Championship Belt, is now available at Amazon Books. This book has over 170 photo/art/graphics of the last and most important victory of Muhammad Ali, clinching him as "The Greatest of All Time", at The Superdome on September 15, 1978. This artistic photographic archive is being published as a Coffee Table Book for the first time. After 38 years, the Kodak film has been restored, digitized, computer enhanced and artistically re-rendered.

The photographs document the moments before, during and after the fight and include fighters, Muhammad Ali, Leon Spinks, along with ABC Sports Announcers Howard Cosell, Frank Gifford and Chris Shenkel. Additionally, images of former Heavyweight Champion, "Smokin' Joe Frazier, life long trainer, Angelo Dundee, ringman Bundini Brown, plus actor Sylvester "Rocky" Stallone and actress, Edy Williams. Ms. Williams's much talked about, but never seen, images of her infamous topless performance in the ring just prior the fight, are published here for the first time in print.

THE FINAL VICTORY defines for the historical record, Muhammad Ali's stunning sports achievement to regain the Heavyweight Championship for an unprecedented third time. Throughout the creative photo/art plates are numerous moving quotations of some of the greatest celebrities, sportsmen, sportswomen, writers, broadcasters, fighters, trainers, super stars, Presidents, international figures and authors, all commenting on the fascinating life and times of Muhammad Ali.

Additionally, there are some of the most famous and profound quotations of "The Greatest" himself, portraying Muhammad Ali as never before,

When first published as an e book in 2013 on Amazon, there were less than 100 images and fewer quotes. This expanded Coffee Table Book has 170 photo/art plates with many more quotes added since the passing of Muhammad Ali this last summer of 2016,

THE FINAL VICTORY gives impetus to the reason why thousands of books, articles, movies, videos and magazine articles have been written about what actor Will Smith has claimed Muhammad Ali to be; "The Greatest Figure of the 20th Century".

THE FINAL VICTORY does not presume to be the last book published about Muhammad Ali, but will only add to the new chapters yet to be written of his enduring legacy.