Protect Your Kids From Being COLLATERAL DAMAGE: New Book From DR. PHIL Regular Navigates Parents Through Minefield of Divorce

Dr. John T. Chirban’s "Collateral Damage," featuring a foreword by Dr. Phil McGraw, is based on research from more than 10,000 surveys from children and parents of divorce. 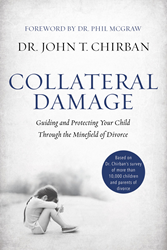 "Collateral Damage: Guiding and Protecting Your Child Through the Minefield of Divorce" by Dr. John T. Chirban (W Publishing Group)

Children are the real victims of divorce. Management of these life-changing challenges determines their future. Based on research from more than 10,000 surveys from children and parents of divorce, "Collateral Damage: Guiding and Protecting Your Child Through the Minefield of Divorce" explains how parents can minimize the impact that divorce has on their children and shows parents how they can uniquely respond to best meet their children’s needs.

"Collateral Damage" was written by Harvard psychologist Dr. John T. Chirban, a frequent guest on Dr. Phil, who has also served on the Advisory Board since the show’s inception. With a Foreword by Dr. Phil McGraw, "Collateral Damage" (ISBN # 9780718079888, $24.99, hardcover) will be released on January 17, 2017 through W Publishing Group, an imprint of Thomas Nelson.

Approximately fifty percent of marriages in the United State fail. Children suffer greatly because of divorcing parents—often in silence, as parents do not know how to effectively guide their kids. When the sorrow and emotional issues of children are not addressed, the cycle of divorce is likely to continue for them and in generations that follow. In addition, while children may appear to be resilient and adjusting, without proper support children of divorce are more prone to academic and behavioral problems, drug and alcohol abuse, criminal behavior, mental and physical illness, and even suicide. How can parents manage their own hurt, shock, anger, and despair so that they can provide their children with what they need?

"Collateral Damage" sounds a wakeup call for parents... and shows parents how to most effectively come through for their kids. It identifies the landmines inherent in the dangerous terrain of divorce and equips them to help their children not to feel abandoned or unheard.

The failure of a marriage does not mean the end of the family. Providing a stable, supportive, healthy relationship with your child demonstrates what a loving relationship looks like, and how their family can thrive, better preparing them for intimate relationships and marriage as an adult.

About the Author: Dr. John T. Chirban has taught classes about relationships, sexuality, and spirituality at his alma mater, Harvard University, for more than thirty years. Since its inception, he has served on the Advisory Board for the Dr. Phil Show, where he is a frequent guest. He is in high demand as an international lecturer on family and spirituality speaking frequently before professional organizations and national societies, and as a guest consultant for magazines, newspapers, and radio shows. Dr. Chirban’s previous book, "How To Talk With Your Kids About Sex" (Thomas Nelson), was released in 2012.