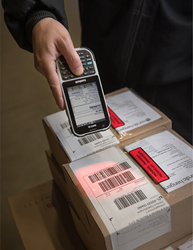 “Our certification testing consisted of installing the GSW client software, setting up a telnet collection to the UTS server and running a test application over a period of time to establish confidence that connections remained stable. We then set up an SSH2 connection to the UTS, stress testing that as well. We disconnected and reconnected multiple times to ensure consistency, then tested the GSW Client features,” explained Steve Lindsey of Georgia SoftWorks. “The Nautiz X4 performed reliably throughout all of our testing, without as much as a hiccup. It is a fully capable device that runs well in a Georgia SoftWorks environment.”

Handheld’s Nautiz X4 is a rugged barcode scanner and rugged handheld combination with an integrated scanner, designed to thrive in tough conditions. Weighing only 11.6 ounces, the Nautiz X4 has a 1GHz processor, 512 MB of RAM and 1GB of Flash memory. The Nautiz X4 is IP-65-rated and meets stringent MIL-STD-810G test standards. The Nautiz X4 is unfazed by environmental factors such as extreme temperatures, dust, water and proved by stringent industry and military-standard durability tests.

Handheld is a privately-held manufacturer of rugged computers including rugged tablets, notebooks and handhelds. Headquartered in Sweden, they have offices in Finland, the Netherlands, United States, Italy, Australia, United Kingdom, Germany and Switzerland. They are one of the fastest growing companies in their sector. They form partnerships around the globe that offer products and solutions that are able to withstand the toughest conditions to get the job done.

Georgia SoftWorks is a software development company based in Georgia, USA that has received global recognition for the GSW UTS, their Telnet Server for Windows and SSH Server for Windows. The GSW UTS is the most robust and reliable UTS on the market, used in the most rigorous and demanding industrial environments. The GSW Telnet Server for Windows is excellent with mobile devices in RFID, RF Terminal, barcode scanners and other data collection and wireless environments, making it a great software to be used on Handheld’s devices and the industries they serve.