This year, supporters helped make our 20th Annual Veterans Day Dinner our most successful fundraiser yet. Swords to Plowshares raised close to $500,000 to support our critical services for low-income and homeless veterans. 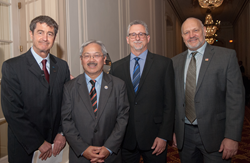 Our Veterans Day Dinner allows us to raise the crucial funds needed to serve San Francisco’s veteran population. Without support from the community, our work would not be possible,” said Mr. Blecker.

The Fund-a-Need pledge drive was dedicated the memory of our faithful supporter Jon Paulson. Our generous supporters helped us to meet our $100,000 Fund-a-Need goal to support our critical legal services for homeless and low-income veterans in memory. Every $1 pledged towards our free legal services, results in $20 leveraged in direct VA benefits for veterans, resulting in a $2,000,000+ impact for veterans most in need.

The following awardees were honored:

The law firm of Latham & Watkins, LLP was named the 2016 Pro Bono Partner of the Year for their involvement with taking on full representation of 12 veteran’s cases, staffing numerous Legal Drop-in Clinics, and for working closely on a Rulemaking Petition to change VA policies that unnecessarily deny hundreds of thousands of veterans access to VA healthcare and benefits.

David Addlestone, a Vietnam Air Force veteran, revered veteran advocate, and former co-director of the National Veterans Legal Services Program, was named the 2016 Community Hero for his lifetime of dedicated advocacy on behalf of veteran.

“The services that we offer empower veterans to live meaningful and productive lives. We restore dignity and hope to veterans in need on a daily basis. Our Veterans Day Dinner allows us to raise the crucial funds needed to serve San Francisco’s veteran population. Without support from the community, our work would not be possible,” said Mr. Blecker.

About Swords to Plowshares:

Founded in 1974, Swords to Plowshares is a community-based not-for-profit organization that provides case management, mental health assessment and referral, rapid re-housing and eviction prevention services, employment and training, supportive housing, and legal benefits assistance for low-income, homeless and at-risk veterans in the San Francisco Bay Area. Swords to Plowshares promotes and protects the rights of veterans through advocacy, public education, and partnerships with local, state and national entities. Learn more about the work of Swords to Plowshares, and ways in which you can help, by visiting our website at http://www.stp-sf.org.