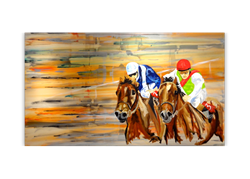 To support opening day at the Del Mar Racetrack in San Diego, Skoldberg and British Customs have a revolving exhibit of art and custom motorcycles built for the Legends Series at the Erik Skoldberg Gallery with top jockeys.

With a distinctive repertoire of international collectors and exhibits, Erik Skoldberg has proven himself to the world to be an artist of note. On Opening Day of the season at Del Mar Racetrack at the Erik Skoldberg Gallery, Skoldberg, the 2014 official artist of the Del Mar Racetrack, will have an exhibit of his art alongside multiple custom motorcycles honoring the greats of motorcycling built by British Customs. Two top-tier jockeys, both private collectors of Skoldberg’s art, will be present to support the exhibit and the rich heritage of motorcycling.

Skoldberg and British Customs are both recognized for their appreciation for heritage and respect for the past, and are committed to paying homage to the greats of motorcycling with the “Legends Series.” British Customs has taken it upon themselves to reach out to the remaining living legends of motorcycling and become the digital gatekeeper of their collective history to ensure that these stories aren’t lost so that generations to come can know and respect the roots of their culture. To complement the publication of these stories, British Customs and Skoldberg have partnered to create a series of paintings and custom motorcycles to further build out the pantheon of these personalities. This iconography depicts many of the pioneers of the adventure spirit who created the lifestyle that so many now live by to share and immortalize their accomplishments. Individuals like Eddie Mulder, Sonny Nutter, Steve McQueen, Bud Ekins, and the 59 Club who created a culture around taking stock motorcycles, personalizing them into what later came to be known as cafe racers, trackers, and bobbers, and accomplished great feats with them. Skoldberg is himself a motorcyclist whose father inspired the passion with him at a young age.

“It’s important that these great stories not be forgotten,” Skoldberg stated about working with British Customs, “because they continue to inspire today’s riders to carry their history and heritage forward into the next great era of motorcycling. I’m honored to be a part of this important project.”

To support opening day at the Del Mar Racetrack in San Diego where Skoldberg’s art currently is on display, Skoldberg and British Customs have a revolving exhibit of art and custom motorcycles built for the Legends Series at the Erik Skoldberg Gallery. The custom motorcycles include the Tracker 11, built to honor the greats of 60s flat track racing; Triumphant, built with off-road racing legend Eddie Mulder; the Sonny Nutter Tribute, built with the eponymous Sliden’ Sonny Nutter who represented the United States in many international races during the 60s and 70s; and the Spirit of Gyronaut, built with the heirs of the original Gyronaut X-1 team to promote awareness for the Lipoprotein(a) Foundation, with many more motorcycles to be featured in the future.

Besides the artist himself, top jockeys competing in this upcoming horse racing season will be present at the exhibit on Opening Day of the Del Mar Racetrack at the Erik Skoldberg Gallery. Many of this year’s jockeys are private collectors of Skoldberg’s art, and will be at the exhibit to support his work and the heritage of motorcycling. Any attending the Opening Day festivities are encouraged to come get a taste of this rich cultural and artistic experience and to meet the artist and jockeys in person.

About Erik Skoldberg:
With a strong local presence and international following, Erik Skoldberg is a contemporary artist who is reaching beyond the canvas ultimately creating a lifestyle brand. His use of rich colors, layering and the energy of his brush strokes sets Skoldberg in a special place within the contemporary art world. Recently opening his very own Solo Gallery at the Del Mar Plaza, Erik has done private collections, corporate offices and hotels. The texture, vibrancy and movement of his pieces provide the perfect source of energy for any space.