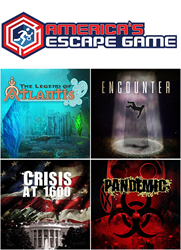 MSA Worldwide and its President and owner Michael Seid, author of Franchising for Dummies, commented that “America’s Escape Game is the freshest and most exciting new concept to come to the franchising arena in a long time."

America’s Escape Game has recently completed its franchise disclosure document, with the assistance of “MSA Worldwide” and its President and owner Michael Seid, author of “Franchising for Dummies.” Mr. Seid commented that “America’s Escape Game is the freshest and most exciting new concept to come to the franchising arena in a long time. There is no doubt that America’s Escape Game will meet with even greater success, in America and around the world.”

Jim Llewellyn, COO of America’s Escape Game related, “We are very pleased to announce the completion of our FDD. We would like to thank MSA Worldwide, as well as the New York based firm of Kaufmann Gildin and Robbins LLP, both of whom are the recognized leaders in the franchise space, for their expertise assistance to get to this important day for all of us here at America’s Escape Game. We have many talented and hardworking people that have built this wonderful, fun and family focused experience, into the winning success it is today. We have chosen to enter the franchise market place in response to the hundreds of requests we have had from prospective business owners here in America and around the world”.

AEG Studios recently announced an exciting new partnership with Vistana Signature Experiences. "This exciting new relationship will bring the best escape room experiences available today, to the finest resorts, in many of the world’s most popular destinations. This unique offering will allow the guest to enjoy a world-class escape game experience, without leaving the comfort of their resort" says Alex Reece, CEO of America’s Escape Game.

What is an Escape Game?
Escape Rooms are an incredibly popular form of entertainment and education. A group of 2-12 are locked in a themed room and you must work together and use your mental, physical and personal abilities to solve puzzles, decode clues and figure out how to escape within a 60-minute time period.

Escape games are both a cerebral work out and social experience for all ages, and have become a popular family and team building activity. America’s Escape Game is proud to have hosted hundreds of corporate team building events with some of the world’s most prestigious companies including Disney, Lockheed Martin, FedEx, International Paper, Enterprise Rent-a-Car, PepsiCo, Universal Studios, and many more.