Rebranding a non-profit to reclaim the lives of innocent men and women and bring a voice to the voiceless. 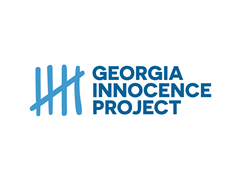 We’re starting to get much larger donations, more consistent and frequently, and that’s directly tied to the website and the fact that we’re showing such a compelling new face of the organization.

Design and Innovation Strategy firm THRIVE today announced the completion of the rebrand for Georgia Innocence Project, a non-profit who champions people on the margins of society—inmates who have been wrongly accused and imprisoned. The Georgia Innocence Project is an emotional cause, headed by law professionals who make it their lives’ work to exonerate men and women who can never repay them.

As the organization was launching a new campaign to coincide with one of the organization's cases being featured on the popular true-crime podcast "Undisclosed," the Georgia Innocence Project partnered with THRIVE on a robust rebranding initiative designed to examine how the organizational brand could be strengthened to further its mission.

THRIVE conducted in-depth, proprietary qualitative research to assess the position of the Georgia Innocence Project and its non-profit peers in the market. Through the engagement, which included brand architecture, messaging and visual identity, THRIVE created greater cohesion around a central idea that clearly conveys the purpose of the organization and rallies its supporters around a common goal.

"This was a unique opportunity for THRIVE to bring awareness and advocacy to an incredible organization and strengthen its public image to make their message heard and passionately understood," said Jonathan Dalton, CEO & Co-Founder, THRIVE. "Our team was inspired by the challenge of injecting humanity and hope into imprisonment and exoneration, something that has a generally negative perception, and helping to rebrand the wrongly accused."

Along with a new identity and web presence, THRIVE designed an iconic symbol for the organization which featured scrawled hash marks and focused on the time each innocent prisoner lost to injustice. The new identity system moves the Georgia Innocence Project away from the dour, sparse identities of other innocence projects to evoke a strong emotional response, helping people to understand the plight of the wrongly accused and inspire them as potential donors and volunteers.

“We can’t even begin to express the value of the work that THRIVE did for us. It’s incredible. It really has been priceless, and the board has been floored. We’re starting to get much larger donations, more consistent and frequently, and that’s directly tied to the website and the fact that we’re showing such a compelling new face of the organization,” said Clare Gilbert, Interim Director, Georgia Innocence Project.

About The Georgia Innocence Project:

THRIVE is a product development and innovation strategy firm who helps ambitious leaders grow profitable brands through informed design. We are an experienced group of researchers, strategists, and designers based in Atlanta, Georgia. We work at the intersection of design, the social sciences, and business to help companies create new value. Our expertise in reinventing categories, connecting insights to business, developing new products, and translating brands into tangible experiences, has helped leading companies to THRIVE!