“Mixed Cookies” from Christian Faith Publishing author Peggy Tait is the heartwarming story about how one family's love for God and willingness to help others brought them together. 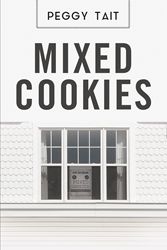 “Mixed Cookies”: one family's hopeful and uplifting experience altered forever by an unexpected shift in their lives. “Mixed Cookies” is the creation of published author, Peggy Tait, the eighty-nine-year-old mother of six, grandmother of twenty, and great-grandmother of twenty-two at last count. (This number seems to increase exponentially). She has been married for sixty-nine years to the same man she married at nineteen. Her entire life has been family-centered. Twenty years flew by between her oldest and youngest kids, the firstborn when she was twenty-one, the last at forty-one.

Harboring a desire for an education as well as a secret desire to be a writer, she attended classes, hit and miss, along the way, finally earning an English degree at Western Washington University at age sixty. Proud to be counted among the famed greatest generation, she was raised during the Great Depression, claiming ability to swap “poor stories” with anyone. Then, with older brothers in service and the entire nation sacrificing through World War II, she gained what could be called an extreme patriot stance, and she is proud of it. She is one of those “oddballs” seen fighting back tears when the anthem is sung and reports letting the tears flow during a visit to the American Cemetery at Normandy on the hill above Omaha Beach. She brought back a vial of that blood-bought sand. She claims Christ Jesus as her savior and Lord, thankful every day for His tender, watchful care. Her favorite hymn declares, “When peace like a river attendeth my way, or sorrows like sea billows roll—Whatever my lot, He has taught me to say, ‘It is well, it is well with my soul.’”

With immigration and the influx of foreign refugees dominating today’s news, this story of how this problem was handled fifty-six years ago stands in stark contrast. This is the story of one American family’s sponsorship of a refugee family in 1959. How this remarkable experience came about and how it turned out to be one of the most valuable, most treasured, and most entertaining episodes in this family’s life is worth reading. With a brand-new baby joining three siblings under ten, the prospect of welcoming unknown, non-English-speaking people into her large, busy home was met with little enthusiasm on the mom’s part. It was Dad who had generously answered the emergency call for help with these refugees. Easy for Dad because he could go off to work every morning! But as events unfolded and they moved in, God moved in with them, quickly softening and opening Mom’s heart.

Seen now as deeply introspective, hopefully inspiring, indeed life-changing, it is really the story of one special year in the life of an ordinary American family. They learned not only the joy of sharing and giving, but also later in the same year, they learned the harder lesson of having to accept help from others. The months of the two families living together were altogether fascinating, exhausting, and hilarious, with communication carried on mostly in pantomime. The story’s title comes from only one of dozens of day-to-day events during that time. On a chilly March day, as the kids played outside, an unknown (and unclaimed) missile came crashing through the dining room window. One side of a cardboard box hurriedly made into a replacement piece for the broken pane turned out to be this family’s trademark: Mixed Cookies. A sea change hit the family halfway through this special year of learning to be cheerful givers. A diagnosis of polio and paralysis for the thirty-one-year-old breadwinning, mortgage-bearing father of four came suddenly, bringing far more fear and uncertainty than had that emergency call earlier seeking help for the refugees. But God came alongside, with answered prayer, financial help (all bills were paid), food, and friendship. Suddenly, placed in the position of receiving instead of giving, the real lesson was to learn God’s grace in taking as well as giving.