Live on Indieogogo, MS-STATUS is an epic MMORPG that promises to revolutionize the genre. 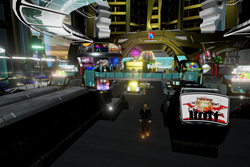 The project is ambitious and expensive, so we want to ask for support from all potential gamers. We have prepared unique prizes and rewards for them.

MS-STATUS, the all new futuristic MMORPG game that takes gamers on an epic quest across the galaxy, is live on Indiegogo and raising funds to bring the project to life.

The year is 2088 and humanity is at its height. Future technologies have surpassed all of humanity’s wildest dreams. There’s no war, no diseases, what else is needed for happiness? However, things take a wrong turn when an interstellar war breaks out in this seeming utopian experience and this is where MS-STATUS begins.

Gamers are instantly transported into an adventure that grows larger and more epic in scale with every passing hour and it is up to them to decide the role they will play, to either save the world or join those who wish to destroy it. It is this incredible freedom and ambition that makes this open world MMO like nothing else on the market.

"In 2015, I finally decided to do this project 100%. First, I found a few people who wanted to join the project. We started to develop the first picture, storylines, characters, locations ... and later spun it,” says founder and CEO Nicholas Bilskiy. “My game is unique, not like any other one and I am sure that the players are convinced of this and will appreciate it. MS-Status has the best physics, game mechanics, crafting system, interesting quests, research… I can’t reveal everything now, but after the game you will be amazed at the game!”

MS-STATUS contains an immense world to explore sure to impress even the most devoted fans of online games. Gamers are given the ultimate freedom to decide their fate in an epic that spans several galaxies and gives players an array of roles to play in their quest. Gamers can decide whether to join the struggle or not, to attack or protect, to build or to destroy. Adventurers are provided with an opportunity to develop new technologies, be engaged in politics, trade, use an experience from real life and implement in the game.

Add in engaging scripts, quests, an advanced craft system – and users will be treated to a truly unique game experience. The game is developed by a team of painters, 3D animators, designers, computer programmers, composers and even scientists to make this the most ambitious MMO game project in a generation.

"The project is ambitious and expensive, so we want to ask for support from all potential gamers. We have prepared unique prizes and rewards for them. The amount that we hope to collect will not pay for the entire project, but will help us finalize Alpha,” adds Bilskiy. “If we can collect more - it will speed up the release date of the game, and will provide an opportunity to make the game more interesting and brighter."

The MS-STATUS MMORPG is currently live and available to support on Indiegogo: https://www.indiegogo.com/projects/ms-status-new-mmorpg-game-4k-video--2#/

MS-Status was formed in June 2015, when three men possessing an extensive knowledge in IT-technologies and experienced in different fields of the gaming industry joined forced. MS-STATUS strongly believes that the success of their work fully depends on people. All the employees of MYAUNION-STATUS LTD are joined together by their love of their work and the mission of the project. The team consists of employees from all over the world.