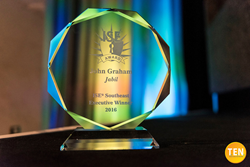 T.E.N., an information technology and security executive networking and relationship-marketing firm, announced today that nominations will be accepted from Nov. 14, 2016 through Jan. 20, 2017 for the 2017 Information Security Executive® (ISE®) Southeast Awards.

Awards include the Information Security Executive® of the Year, which recognizes executives who have made a positive impact on their organizations through risk management, data-asset protection, regulatory compliance, privacy and information security; and the ISE® Project of the Year, which recognizes a project completed during the previous 12-18 months that has had a significant impact on an organization’s risk management or information security posture. Eligible nominees meet all appropriate criteria and are based in the U.S. Southeast territory, which includes Alabama, Florida, Georgia, Kentucky, Maryland, Mississippi, North Carolina, South Carolina, Tennessee, Virginia and West Virginia.

Executives and/or project teams can be self-nominated in addition to entries by supervisors, employees, peers or technology partners. Anyone interested in nominating for the ISE® Southeast Awards may download the forms here. All nominations are sent to T.E.N.’s distinguished panel of ISE® Judges for review and scoring.

“The ISE® Southeast region has many exciting, innovative projects and inspiring security leaders that deserve recognition,” said T.E.N. CEO & President Marci McCarthy. “We encourage executives and their teams to consider their work over the past 12-18 months and take advantage of this opportunity to benchmark against other high-caliber programs in the region.”

Nominees, finalists and winners will be recognized at the ISE® Southeast Executive Forum and Awards on March 14, 2017 at the Westin Peachtree Plaza Downtown in Atlanta, GA. The Executive Forum will include keynote speakers, interactive roundtables moderated by the CISOs and VPs of participating companies and engaging panel discussions. Finalists and winners in both categories are announced at the awards gala that evening and recognized through press coverage and inclusion on the T.E.N. and ISE® websites. Organizations taking part in previous programs have included leading organizations, such as Jabil, Cox Automotive, Actian Corporation and Elavon.

About ISE® Award Program Series
For more than a decade, the Information Security Executive® (ISE®) of the Year Award Program Series has empowered security executives and their project teams to Connect, Collaborate and Celebrate. Recognized as the industry’s most prestigious IT Security award program, it has become the most anticipated award program for security executives and their project teams because it offers opportunities to benchmark against other leading security programs, while providing a channel for well-deserved recognition and visibility. Winners have included executives and project teams from leading organizations such as Nike, The Walt Disney Company, the United States Postal Service, Schlumberger, Texas Instruments, JPMorgan Chase & Co., Equifax, Comcast, PayPal, Northrop Grumman Corporation, and Nationwide.