Thought leaders in Blockchain and advertising came together in New York City at the ad:tech conference to discuss the opportunities of this disruptive technology and how it could impact the industry 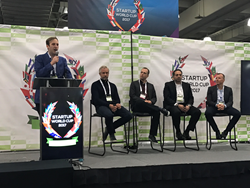 Since its inception with Bitcoin in 2008, the uses of blockchain have since exploded to include fintech, music, gambling and even healthcare. On Thursday, November 3, five blockchain and advertising technology thought leaders came together at New York’s ad:tech conference for the world’s first advertising and blockchain panel.

David Bailey moderated the panel titled “Driving ROI through Transparency, Trust and Collaboration: Enter the Blockchain,” bringing with him a wealth of knowledge as the CEO of the blockchain media conglomerate BTC Media. He was joined by Konstantin Richter, advisor to Gem (the leader in blockchain healthcare solutions) and Wiredrive (SaaS for advertisers); Jim Wilson, President of Premion OTT (part of TEGNA media); as well as Steven Nerayoff, blockchain expert and Senior Advisor of Ethereum. Also on the panel was Adam Helfgott, Co-founder and CEO of MadHive, one of the first companies to build their advertising and data platform on top of a blockchain.

The panel focused on the inherent qualities of blockchain technology: transparency, trust, automation, identity management, data portability--and explored how those qualities could be implemented to ultimately drive innovation and efficiency within the advertising industry.

Nerayoff emphasized how use of blockchain technology streamlines transactions of any kind.

“The nice thing is the transactions between two parties all go through this protocol, which is the real beauty of the blockchain. Anything you want automated, to cut out a third party, can be done through the blockchain protocol,” says Nerayoff.

This technology could also assist the management of data by introducing an absolute integrity to information held within the ledger. In its current state, many aspects of the ad-tech industry are reliant on ‘trust’ between walled gardens of data, which is a state of belief rather than reliable proof.

“When you ultimately look at the chain from the consumer all the way to the brand advertiser,” added Richter, “there are a lot of systems interconnected across walled gardens and it is very difficult to reconcile that what you have is actual factual data, you just have to trust it.”

MadHive’s front-end product services the streaming video industry, where there is so much disruption while broadcast moves to digital. Said CEO Helfgott: “It’s an open playing field with more opportunities to build better systems around data targeting.

"The data from first, second and third parties are brought together for targeting and companies want to move it and act on it, across platforms and devices using the rules they already have in place. Using smart contracts governed by a private blockchain, you can actually track everything that is going through the supply chain much more effectively and transparently.

Helfgott explained that in a private blockchain setting “data partners and advertisers can lock and unlock data, making it transparent, but only to certain people.”

Richter pointed out that with the millions of dollars spent targeting each person per year the blockchain would be a powerful tool for users to manage their own identities with certainty: “Decentralized ledgers allow the collection and management of data and identities, which could give people with the ability to own and manage their identities over different channels; this could be very powerful.”

Premion President Jim Wilson recalled a conversation he had that very morning in which the disparate data stores meant a company could not retrieve its own first-party advertising data.

“I was on a business call with a fast-food chain brand who wanted to find out specific data from all the platforms they are advertising on, but the platforms are all siloed in these walled gardens which cuts out interoperability. This is a challenge for us, but something we are intent on solving,” said Wilson.

Despite the problems these opaque data sets create for companies, all the panelists agree that the advertising industry as it stands is intentionally built on the monopolization of data.

“There is an inherent fraudulent nature in the process right now,” said Richter. “It’s a business model built around taking cuts of money so there’s no interest in transparency, but the blockchain could be very disruptive to this model.”

Wilson believes the increased democratization of data will help companies individually, and the industry as a whole.

“At the end of the day the opportunity to distribute data out to your partners is so they can build a better service. With the companies I advise, I highly recommend the safe distribution or sale of data, not just to add value to the industry but to add value back to your company,” said Wilson.

While most of the panelists agreed that high-level commercial implementation of the blockchain might is still in its infant stages, Bailey was able to draw on his early experience with Bitcoin to describe a possible future for the technology.

Helfgott explained that one of the things his company MadHive is working on is innovation around the payment systems using the ledger.

“At the moment payments and chargebacks can take from 30 to 90 days, but with a decentralized protocol this could be solved almost immediately,” he said. However, he is realistic that this “would require infrastructure changes within these organizations so this is an application that could be applied in the future.”

BTC Media CEO Bailey brought the discussion back to the enormous and potentially revolutionary power of blockchain technology: “The technology is such that it could vaporize entire business models. When someone figures that out, you see partnerships with startups that are leading innovation. It took three years before commercial institutions started taking bitcoin seriously, but nine months after the first major financial institution made a partnership, 300 other institutions had followed suit.”

Nerayoff, also a very early adopter of blockchain technology, intimately understands the immense potential of technology in advertising, and particularly in Fintech.

"There is a huge renaissance occurring in FinTech that’s being spurred by the Blockchain. I felt it in my bones back when I got into this space five years ago. The advancements taking place right now are going to be unprecedented," said the Maple Ventures CEO.

In his closing statement Nerayoff said that while the blockchain may be a ground breaking technology for many companies, it is never going to be a bandage solution across all verticals.

"While I don’t believe the blockchain has universal benefit as some would suggest, I do believe it will probably touch every single industry is one way or another for no reason than the fact that industries and nations are so interconnected these days."

He furthered that while massive success is a game of chance, it is a game that many blockchain technologies appear to be doing pretty well in.

"This space involves big outside bets. For example, no one in their right mind would have suspected that Ethereum was going to have a billion dollar market cap today. I see that with Zcash and Ethereum absolutely, which are well positioned to create billions and billions of dollars in value," said Nerayoff.

For media inquiries, or to request an interview with any of the panel members, please contact Kelley Weaver at Melrose PR at Kelley(at)melrosepr(dot)com or (310) 260-7901.

About ad:tech
ad:tech is the original industry authority for marketing and media technology, where marketing, technology and media communities assemble to share new ways of thinking, build strong partnerships, and define new strategies to compete in an ever-changing marketplace. Several annual events around the world deliver immersive education through keynote speakers, timely topic-driven panels and hands-on workshops as well as showcasing the latest products and solutions to help deepen understanding and create new ideas that will drive innovation. Attendees leave ad:tech inspired by what’s new and what’s next, armed with the tools and techniques they need to shift and re-imagine their own businesses. For more information, visit http://www.ad-tech.com. Follow @adtech on Twitter.

About BTC Media
Headquartered in Nashville, Tennessee, BTC Media LLC is the publisher of Distributed, Bitcoin Magazine and yBitcoin. The company is the world’s largest provider of multimedia educational and informational resources about the blockchain and digital currency industries.

About MadHive
Headquartered in New York City, MadHive is a video advertising and data platform that allows brands and publishing partners to build audiences in innovative ways and target those audiences across multiple screens and platforms. MadHive’s back-end product uses blockchain technology to safely allow brands and publishers to work together in new ways by leveraging the inherent trust and verifiability of a blockchain network.

About TEGNA
TEGNA Inc. is comprised of a dynamic portfolio of media and digital businesses that provide content that matters and brands that deliver. TEGNA reaches more than 90 million Americans and delivers highly relevant, useful and smart content, when and how people need it, to make the best decisions possible. TEGNA Media includes 46 television stations and is the largest independent station group of major network affiliates in the top 25 markets, reaching approximately one-third of all television households nationwide. TEGNA Digital is comprised of Cars.com, the leading online destination for automotive consumers, CareerBuilder, a global leader in human capital solutions, and other powerful brands such as G/O Digital and Cofactor.