Now on Kickstarter, Captr gives any smartphone user the power to record and stream video hands-free with a smartphone bodycam jacket 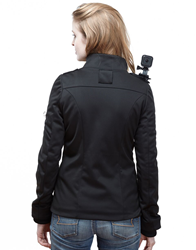 With more protests happening, most recently surrounding the election, and for any number of reasons throughout the year, smartphone users can use Captr to record events for an extra level of personal security from potential threats around them.

The now popular Captr Jacket, currently on Kickstarter, was originally designed to let smartphone users record and stream family, travel and extreme sports videos hands-free. But Captr also serves as a body-cam. Captr supporters are impressed by the ease of recording potential threats for increased safety and accountability.

“With more protests happening, most recently surrounding the election, and for any number of reasons throughout the year, smartphone users can use Captr to record events for an extra level of personal security from potential threats around them,” said Captr co-founder Hesam Meshkat.

The public discussion over increased recording of incidents has created a movement on all sides to deploy body-cams. Any smartphone user can use Captr to record their own surroundings when they feel threatened or nervous in any situation, including:

“Whether it’s for security, accountability or just for peace-of-mind when in big crowds or while traveling alone, Captr can serve as an integral part of a smartphone user’s daily life when it comes to personal safety,” Meshkat said.

With Captr, a smartphone securely locks into place in a perfectly fitted pocket with a built-in gorilla glass lens. The water-resistant Captr pocket features a scratch and lint-resistant eyepiece window to provide a clear view for recording. Smartwatches can also be used to manage apps including cameras, video cameras, Facetime/Video Chats and Flashlights for nighttime emergency situations.

Captr is available in Activewear and Insulated Bomber Styles and designed for iPhones and Androids. Captr jackets also have an embedded smartphone charger so an opportunity is never missed to record a moment that should have been captured, whether for personal safety or fun.

Captr Smartphone Jackets have raised nearly $30,000 in just one month of crowdfunding, and about three weeks remain for people to purchase Captr at early-bird discounts. For more information or to order, visit the Captr Campaign Page on Kickstarter.