With both major American political parties continuing to promote big government policies, the Federalist Party is launching to help rein in the power held in Washington DC. 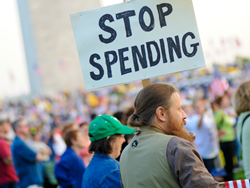 Even with Republicans controlling the legislative and executive branch in DC, we see no indication that they’ll be relinquishing powers to the states.

In response to the ongoing surge of federal government overreach, a group of conservative activists, journalists, and conscientious citizens have formed the Federalist Party. It is actively seeking state party leaders to begin the grassroots efforts necessary for ballot access and fundraising.

“Our first challenge will be to inform the masses that new federalism, the way that Ronald Reagan envisioned it, takes powers from the federal government and gives them back to the states,” said party organizer JD Rucker. “Once we clear that hurdle, we’ll need to show that neither the GOP nor the Democrats practice federalism because they want to consolidate power in DC.”

The national party is calling this a “soft launch” with an emphasis on building their foundations in individual states. They have organizations forming in several areas across the country and plan on having the party present in all 50 states by the middle of 2017 in preparation for the 2018 midterm elections. While much of their appeal will be to Constitutional conservatives, they believe that small government principles can be embraced by a diverse range of Americans.

“Federalism is generally considered to be a conservative philosophy, but it’s beneficial to nearly every political ideology,” Rucker said. “For example, an environmentalist Democrat can be shown how federalism greatly benefits their cause by bringing action to the local level instead of through wasteful, generalized federal regulations.”

“Even with Republicans controlling the legislative and executive branch in DC, we see no indication that they’ll be relinquishing powers to the states,” Rucker continued. “Smaller government and a focus on individual freedoms can only be achieved if politicians are made to dramatically reduces all three components of overreach: bureaucracy, budgets, and power.”

Donald Trump’s recent presidential election victory is not being credited as the reason for forming the party now. To the contrary, the party feels that GOP victories made their goals easier to achieve.

“If the Democrats had won the presidency or the Senate, we would be forced to play our hand more rapidly,” Rucker said. “Republican victories bought us time to build our party with the core mission in mind rather than as a panicked response. Now, we can support federalist measures while opposing the trend of big government intervention.”