Sujata Tibrewala, Current Artist in Residence at LFA Chicago, Opens a New Exhibit Exhorting Everyone to Look at Humankind Beyond Race and Gender

Artist Sujata Tibrewala, through a new exhibition at her Cupertino studio hopes that despite a vicious election campaign America will be a country without biases. 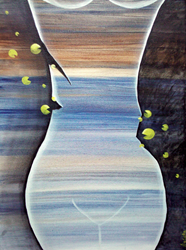 Empty Vessel: The painting highlights the fact that women's bodies are not mere vehicles to carry babies

A country is considered great only when its citizens are granted their deserved rights.

Feminist artist Sujata Tibrewala had been closely observing the Presidential campaign in the U.S. and has also been expressing her views through the medium of her artworks recently. She is now out with a new exhibit hoping that the outcome of the elections does not turn out to be as frightening as some of the remarks during the campaign were.

Ms Tibrewala who has repeatedly exhorted the idea of women’s liberation and has also been championing the cause of fairness and equality for all through her paintings, felt deeply concerned with the rhetoric during the Presidential campaign. She feels today when America has found a President elect in Donald Trump, the citizens can only hope and pray that the country does not become rife with biases and subjugation.

The artist talks to her audiences through the medium of her paintings and tries to invoke attention towards the fact that all men and women are equal. Factors such as race, color of skin and religion are superficial entities. She believes in a world where everyone is given the freedom to live and practice his or her beliefs with dignity. She also fears that if some of the propaganda promoted during the campaign is implemented the world would be full of scorn and hatred. The artist advises the young to pick love not hate and never ever disdain a fellow human based on race or culture. In one of the featured works titled Skin Deep that is displayed at the exhibition the artist brings to the point the thought with an effective portrait of a young woman and a skeleton. The idea being, if all humans are skeletons just dressed in skin does it matter that the colors vary? The artists’ works constantly remind the onlooker that variances between humans are just happy reminders of their uniqueness. In one of the other works titled Empty Vessel, the artist raises the issue of misogyny. Her painting questions the extremely patriarchal notion where women are reduced to their bodies. She abhors the idea where a woman is seen as an instrument to have babies or is identified by her looks and body.

The artist with a series of such powerful works reminds that the world is beautiful and a country remains great as long as its citizens are granted their deserved rights. She hopes to see a better America that rises above the fault lines that were laid open during the campaign.

About the artist:
Sujata Tibrewala, a self-taught artist come engineer remarkably embodies the indomitable spirit of human existence through her works. Her works revolve around the theme of eco-feminism. She has exhibited her artworks in some of the most reputed venues around the globe such as University of Illinois, Chicago, Raw San Jose, Parallax Art Fair London, the Regional Commission of Arts St Louis, Life Force Arts Chicago, Mindworks Gallery Chesterfield, St. Louis Artists' Guild, Chesterfield Arts, Art World Association, Women's Caucus for the Arts, MySLART and Lalit Kala Academy, Delhi. She moved to the USA in 2010 from India and practices her art form at the Bay Area, CA, where she resides presently.