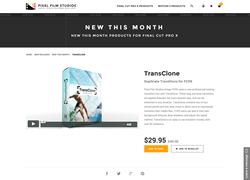 TransClone gives editors the exact tools to create an eye catching transition that will take any video project to the next level.

"TransClone gives editors the exact tools to create an eye catching transition that will take any video project to the next level," said Christina Austin, CEO of Pixel Film Studios.

With TransClone, users have the ability to glide from one scene to the next in a whole new way. Users also have total control over multiple speed methods, positions, drop shadow, multiple clone panels, and more all within FCPX.

Sweep from one scene to the next with over 30 fully customizable clone panel transitions from Pixel Film Studios. With TransClone, each user has the option to select from two to four clone panel transitions and the ability to flip the animation. TransClone also allows users to transition from media, with ease. With full control over the animated speed methods, the possibilities are endless all within Final Cut Pro X.

With TransClone, each preset is fully customizable with a click of a mouse. As a result, users have total control over applying media to the provided drop zones. In addition, each preset comes with customizable drop shadow, speed method, size, and position making the possibilities endless all within Final Cut Pro X.

TransClone allows users to select a desired speed method in Final Cut Pro X. As a result, users are able to change the speed of animations without having to worry about keyframes by using the drop down menu under Speed Method. Simply drag the desired transition into the FCPX timeline, select a speed method, and enjoy the results.

TransClone was professionally designed to work seamlessly inside of Final Cut Pro X. As a transition effect, each TransClone preset can be dragged and dropped onto media and previewed in real time. With the published parameters found in the FCPX inspector, users have the ability to make further adjustments with just a few clicks of a mouse.