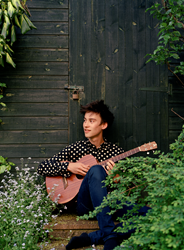 Jacob Collier, courtesy of the artist

Performing a number of compositions from Collier’s 2016 debut recording “In My Room,” the MIT Festival Jazz Ensemble (FJE), Collier and others will premiere arrangements of “Down the Line,” “Saviour,” (created by Jamshied Sharifi) and “Hajanga,” arranged for big band and orchestra by Collier himself. The concert also includes performances by Collier in a cappella, small combo and solo settings.

The concert will feature a newly created experimental improvisation system developed by Bloomberg and collaborators, allowing Collier to communicate with members of the FJE in real time, sending fragments of musical notation, articulation and other directions to mobile devices of the musicians. This concert will be the first time Bloomberg and Collier explore how such a system may be used to generate spontaneous large-scale arrangements, with the goal of allowing both the performers and Collier to be more emotionally connected to each other and the audience.

In addition to the December 10 concert, Collier will present a public lecture/demonstration on Wednesday, December 7, 5pm-6pm “The Creative Process of Jacob Collier,” held in Lecture Hall 6-120 on the MIT campus in which Collier will describe his process for creating his highly popular music videos.

***
This concert is part of the 2016-17 MIT Sounding Series, presented by the MIT Center for Art, Science & Technology (CAST) and MIT Music and Theater Arts.

About Jacob Collier
Jacob Collier is recognized as one of the world’s most distinctive, inventive and prodigious young musicians. Based in London, UK, Jacob has been inspired by many sounds – his music combines elements of Jazz, A cappella, Groove, Folk, Trip-hop, Classical music, Brazilian music, Gospel, Soul and Improvisation (to name a few), which culminate to create the world of "Jacob Collier." Collier grew up in a family of musicians and has honed his musical ideas from a very young age. He has embraced the world of the Internet to share his distinct form of creativity, becoming best known for creating his trademark multi-faceted YouTube videos from his music room at home, wherein he sings all the parts, plays all the instruments, and visualizes every component with a mosaic of screens. Since his first YouTube upload in December 2011, Jacob’s online social channels have garnered over 150,000 international followers and more than 7.5 million YouTube views. Most recently, Jacob released his debut album, “In My Room”, worldwide on July 1st, 2016. The album went to #1 on iTunes Jazz in 23 countries. It also debuted at #1 on the Billboard Contemporary Jazz Album chart. The album was well received critically with NPR premiering it on their First Look program a week before its release, and spouting praise “Jacob’s warmly humanistic debut In My Room securely positions him as this year’s wunderkind-to-watch.” As well as Billboard simply stating, “Jacob Collier is Blowing Minds.” Jacob is set to tour the USA in September of this year, and second leg in Europe in November. http://www.jacobcollier.co.uk/

About The MIT Festival Jazz Ensemble
Founded in 1963 by Boston jazz icon Herb Pomeroy and led since 1999 by Dr. Frederick Harris, Jr, the MIT Festival Jazz Ensemble (FJE), is comprised of outstanding MIT undergraduate and graduate students studying a wide range of disciplines. FJE has released five professional recordings including its major jazz label debut release on Sunnyside in 2015, Infinite Winds (a joint CD with MITWE). The CD which features FJE performing the world premiere recording of Chick Corea’s From Forever (composed for FJE), received a five-star review from Down Beat and was chosen by the magazine as one of its “Best Albums of 2015 Five-Star Masterpieces”—the first such recognition of its kind for a collegiate ensemble. The Boston Globe called the recording “one of the most compelling of 2015.” The FJE has a long history of performing original music by MIT students and composers from around the world.

About Ben Bloomberg
Since starting MIT in 2007, Ben Bloomberg has worked for Professor Tod Machover at the Media Lab, touring internationally to design and support technology for Opera of the Future productions. He specializes in the design and implementation of advanced surround sound and audio systems for large venues, but he has created many kinds of live performance systems ranging from musical instruments to architectural lighting. Ben started running sound at age nine and has since engineered hundreds of shows in venues all over the world—his designs have been praised (with their associated performances) by critics for the the London Times, Chicago Tribune and Wall Street Journal. In his time on the road, he’s crossed paths with many artists, engineers and designers—from Björk to Ariana Grande, people seem to seek him out when there’s a challenge that hasn’t been seen before, requiring novel and highly customized solutions. At the lab and beyond, Ben works with colleagues to build systems which push the limits of performance and expression. Their goal is create technology which brings the performers closer to the audience instead of diminishing them in the presence of large screens or sets.

About the MIT Sounding Series
The 2016-17 MIT Sounding Series is produced by the MIT Center for Art, Science & Technology (CAST) Visiting Artists Program and MIT Music and Theater Arts. Curated by Evan Ziporyn, Faculty Director of CAST, this season of Sounding integrates the avant-garde sounds of ancient instruments and traditional practices with cutting-edge composition and technology to present various visions of a new, evolving music that defies genre. sounding.mit.edu

About MIT Music and Theater Arts
The Music and Theater Arts Section of the School of Humanities, Arts, and Social Sciences annually affords over half of MIT undergraduates — over 2,000 students per year — the opportunity to experience the unique language and process of the performing arts. Faculty and teaching staff, informed by their ongoing professional activities, help students understand art’s demand for rigor and discipline and its non-quantitative standards of excellence and beauty. mta.mit.edu

About the Center for Art, Science & Technology
A major cross-school initiative, the MIT Center for Art, Science & Technology (CAST) creates new opportunities for art, science and technology to thrive as interrelated, mutually informing modes of exploration, knowledge and discovery. CAST’s multidisciplinary platform presents performing and visual arts programs, supports research projects for artists working with science and engineering labs, and sponsors symposia, classes, workshops, design studios, lectures and publications. The Center is funded in part by a generous grant from the Andrew W. Mellon Foundation. Evan Ziporyn is the Faculty Director and Leila W. Kinney is the Executive Director.

Since its inception in 2012, CAST has been the catalyst for more than 35 artist residencies and collaborative projects with MIT faculty and students—20 cross-disciplinary courses and workshops, four concert series and numerous multimedia projects, lectures and symposia. The visiting artists program is a cornerstone of CAST’s activities, which encourages cross-fertilization among disciplines and intensive interaction with MIT’s faculty and students. arts.mit.edu/cast

About the Arts at MIT
Over 70 percent of incoming freshmen have prior training in the arts, and nearly 50 percent of all MIT undergraduates enroll in arts courses each year. The arts strengthen MIT’s commitment to the aesthetic, human and social dimensions of research and innovation. Artistic knowledge and creation exemplify MIT’s motto—mens et manus, mind and hand. The arts are essential to MIT’s mission to build a better society and meet the challenges of the 21st century. arts.mit.edu