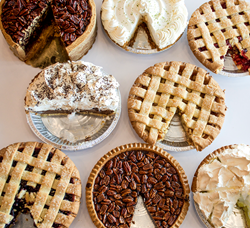 “We know the holidays are a special time for our customers,” says Bobby Jucker, Three Brothers Bakery co-owner and fifth generation baker.

With fall in full swing and the holidays quickly approaching, it’s the perfect time to indulge with holiday treats and sweet desserts with family, friends and loved ones. Three Brothers Bakery is known for its scratch-made items created by fifth generation bakers, in-house roasted coffee and creating memories for generations of Houstonians and customers across the country alike.

“We know the holidays are a special time for our customers,” says Bobby Jucker, bakery co-owner and fifth generation baker. “Year after year, our team is honored to prepare desserts, pies, pastries and breads for people to enjoy when gathering for the holidays. We know families and loved ones share time-honored holiday traditions and we are grateful to be a small part of these special events and celebrations.”

To celebrate the holiday season, Three Brothers Bakery’s award-winning Pecan Pie with an original, scratch-made pie crust filled with a mound of southern pecans to create the ooey, gooey pie, is the perfect gift or addition to a holiday dessert table. And, this southern treat was recently named to Country Living magazine’s “8 best mail order pies” list for the second time. The Pecan Pie is not the only flavor to indulge with; choose from Chocolate Fudge Pecan, Chocolate Mousse, Apple, Pumpkin and Cherry, among others.

For the more adventurous pie lovers, the bakery’s Gingerbread Pie, made with a gingerbread crust, a traditional gingerbread spice cake filling, and luscious cream cheese frosting with mini gingerbread men dancing in a circle on top, is the perfect way to enjoy a beloved holiday flavor. Additionally, the bakery’s classic cheesecake takes a holiday twist with a Pumpkin Cheesecake, with a chocolate graham cracker crust and part cheesecake and pumpkin filling, creating a delicious dessert sure to please both pumpkin pie and cheesecake lovers.

And, for those truly looking to make a statement at their holiday gatherings, the bakery’s famed Pumpecapple Piecake consists of a three layer piecake featuring a pumpkin pie baked in a pumpkin spice cake, a pecan pie baked in chocolate cake and an apple pie baked into a spice cake, with cream cheese icing holding each layer together, all topped and covered with cream cheese icing, pecan pieces and a caramel drizzle. Weighing in at approximately 24 pounds and standing 11 inches tall, this Texas-sized dessert can feed 80 people and is truly an edible work of art.

Three Brothers Bakery’s online store features select items that can be ordered and shipped across the U.S., making the Houston-based bakery the one stop shop for desserts and pastries this holiday season.

For more information regarding Three Brothers Bakery and any of its holiday offerings, please contact Lauren Sancton at 713-225-0880 or lauren(at)integrateagency(dot)com.