The magazine media community celebrated the year’s best in content and design at an awards ceremony in New York City on Thursday, November 10. 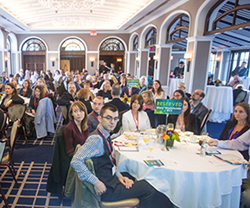 The winners and honorable mentions of min’s 2016 Editorial & Design Awards were honored at an intimate breakfast in New York City on Thursday, November 10. The program, which has operated for more than ten years, honors the industry’s best achievements in content and design from the past year.

min received well over 300 entries this year in more than 40 categories from consumer, B2B, association and digital native brands. Categories ranged from one-off efforts like “Best Single Article” to broader recognitions such as “Single Magazine Issue.”

View the full list of winners, honorable mentions and hall of famers.

Congratulations to the 2016 Hall of Fame Honorees: