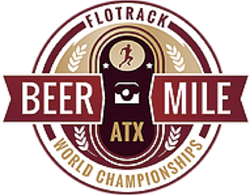 FloSports announced today the official race details for the 2016 FloTrack Beer Mile World Championships. The third annual event will be held on Saturday, Dec. 17, at 1:00 pm CT, at the Austin American-Statesman headquarters in downtown Austin.

The FloTrack Beer Mile World Championships will feature Oskar Blues as the “official beer” for the race and will bring together the best beer mile runners in the world for a shot at the sport’s prize purse and this year’s world title.

The 2015 FloTrack Beer Mile World Champions, Erin O’Mara and Lewis Kent, will return to defend their respective titles in the women’s and men’s races. In addition, world record holder Corey Bellemore, who boasts a personal-best beer mile time of 4:34.35, will compete. Overall, six of the nine fastest men ever in the beer mile, and four of the seven fastest women ever, are confirmed to race in this year’s event.

“In the past three years, we’ve seen a groundswell of interest in the FloTrack Beer Mile World Championships worldwide, and this year’s event looks to be our biggest yet,” FloSports co-founder and COO Mark Floreani said. “There’s no doubt that we have the most competitive fields ever for the elite men’s and women’s races, so we’re excited to see records get broken and have a lot of fun with the spectators and runners.”

"The sport has come a long way since last year,” Kent said. “I won't be returning as the favorite, but experience means a lot in the beer mile, and come race day I'll be ready to roll."

Beer miles, which have been an unofficial rite of passage in the track and field community for years, require participants of drinking age to consume a 12-ounce (355ml) can of beer that has at least 5% alcohol content before each of four laps in a mile.

Free to the public and streamed live on FloTrack.com, the 2016 FloTrack Beer Mile World Championships will feature a beer garden (21+), food trucks, music and competitors ranging from the world’s top-ranked beer milers, Olympians, local businesspeople and average Joe’s alike. In addition, Oskar Blues line of beers will be served to event competitors and will be available to attendees for purchase during the event.

Divisions at the 2016 FloTrack Beer Mile World Championships will include open heats, a sub-elite heat where runners must submit their times and qualify to participate, and elite heats for both men and women to crown the beer mile’s 2016 World Champions. In addition, there will be relay divisions for local and national media, Austin tech companies, and more.

Last year, in the second FloTrack Beer Mile World Championships, more than 300 competitors from around the world participated in the race. A fan favorite, 81-year-old Elvira Montez ran a beer mile in 20:25, beating both of her children. Also, one of the most entertaining parts of the event is the 4x400 meter beer relay.

For more information, to register to race, and to view the event live, visit http://www.flotrackbeermile.com.

FloSports is a direct-to-consumer, subscription-based sports media company based in Austin, Texas, that partners with event rights holders and governing bodies to unlock a world of sports coverage that true fans have been waiting for. Through live streaming of premier events, original video programming, and weekly studio shows, FloSports is growing the sports, the athletes and the fans. Current verticals under the FloSports header are Wrestling, Grappling, MMA, Elite Fitness, Boxing, Softball, Tennis, Pro Wrestling, Gymnastics, Marching, Basketball, Volleyball, eSports, Rodeo, Climbing, Swimming, Cheerleading, and Track.