We got dumped on, says the Gunnison-Crested Butte Tourism Association 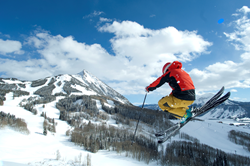 The first winter storm of the season hit Crested Butte last night. Storm totals are expected to hit 20". Known for extreme skiing and the steepest terrain in America, Crested Buttians are ready to hang up their mountain bikes and put on skis. The mountain town called "Colorado's Last Great Ski Town", isn't stressed about the long fall and little snow. In the 2007-2008, Crested Butte didn't see snow in the early season, and ended up with a 100" by Christmas.