Statement from Kathy Calvin on Nomination of Governor Nikki Haley as U.S. Ambassador to the United Nations 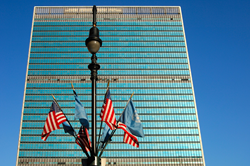 Throughout her time as governor of South Carolina, Nikki Haley has shown that strong international cooperation and diplomacy help advance U.S. interests at home and abroad.

If confirmed, Nikki Haley will begin her post just as António Guterres becomes the new UN Secretary-General. Both leaders have the strong executive management experience to ensure a dynamic U.S.-UN partnership so that the world is equipped for the challenges of the 21st Century.

Nikki Haley would also start at a time when bipartisan leadership has ensured that the U.S. is fully meeting its financial obligations to the UN, bolstering America's ability to influence the international agenda. The U.S. remains integral to a strong UN, and our status as a permanent member of the Security Council and host of UN headquarters reflects the central importance of a U.S.-UN relationship.

An effective UN is good for America, helping to promote our shared values, national interests, and global security.”