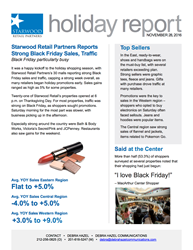 With the stock market at record high levels and unemployment now under 5 percent, consumer confidence has returned, and shoppers are back in the stores.

The 2016 Holiday retail sales season kicked off with healthy sales of apparel and strong traffic on Black Friday, announced Starwood Retail Partners in its first “Holiday Report,” a weekly update on percentage sales and traffic figures throughout its 30-center portfolio, the company announced today.

A number of apparel retailers reported strong gains in its stores around the portfolio, especially on Black Friday, as did cosmetics. Comparatively warm weather in the Central and East regions slowed outerwear sales, but footwear was selling well at many department stores. Jewelry sales were mixed throughout the portfolio, with some tenants reporting double-digit declines from Thursday through late Saturday, while others reported equally large gains.

“With the stock market at record high levels and unemployment now under 5 percent, consumer confidence has returned, and shoppers are back in the stores. However, they do remain focused on finding value, with promotions particularly successful,” says Scott Wolstein, CEO of Starwood Retail Partners.

Twenty-one of Starwood Retail’s centers opened at 6 p.m. on Thanksgiving. Shoppers may then have slept in a bit on Saturday, as many centers reported that traffic was slow in the morning, and then picked up in the afternoon.

To compile the data for the report, Starwood Retail's mall staff requests year-over-year sales from approximately 28 center specialty tenants and department stores that best reflect overall results. Traffic figures are obtained through in-center wifi technology. Retailers also report on the best-selling items at their stores, giving an overview of what today’s shoppers want and need. In addition, mall staff at seven centers representative of the portfolio are interviewing guests throughout the season for anecdotal evidence of their shopping plans and patterns. Of those surveyed, more than half (53 percent) noted they still had much shopping to do.

The full report can be downloaded here.

ABOUT STARWOOD RETAIL PARTNERS
Starwood Retail Partners is not your father’s – or grandfather’s – landlord. We’re acquiring, redevelopment, managing, leasing and operating the next generation of shopping centers for a new generation of shoppers: active, exciting community cores for an increasingly interconnected consumer.

Owned by Starwood Capital Group, we have grown our portfolio to 30 centers in 16 states across the United States since our founding in 2012, working with top-tier investment firms to help finance our properties, and employing the talents and skills of the most creative professionals in the business to maximize their value. We build solid relationships and partner with our retailers, and invest in innovative technologies that help our properties become more productive, our stores more exciting and our shoppers more engaged.

We understand that ultimately, as an owner, as an employer and as a citizen of our communities, it’s not about property, it’s about people. http://www.starwoodretail.com