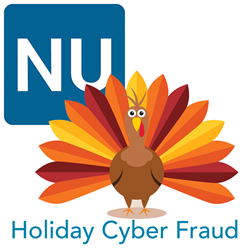 Analyzing the information discovered from NuData's Trust Consortium, it is clear that attackers are rapidly evolving their methods to more complex and evolved schemes.

Fraudsters are using increasingly sophisticated cyber fraud techniques and leveraging spikes in activity over holiday shopping periods to circumvent detection. As merchants and financial institutions implement additional security layers for automation, account takeover and fraud detection, hackers are evolving to find more complex and pervasive ways to commit fraudulent activities online. Much like a virus that mutates in response to a vaccine, hackers are finding new ways of infiltration.

NuData Security analyzed over 80 billion behavioral events annually over its customer base, and this month alone, has performed real-time analysis on 40 billion data points. NuData findings are such:

Mobile transactions represent a concern for merchants this holiday season, as consumers continue to move to mobile shopping, retailers are trying to balance security and experience. NuData observed a 258% increase in unique devices (across the entire customer base), firmly supporting industry statistics that over 50% of all e-commerce traffic are now coming from mobile devices.

Robert Capps, vp, business development, NuData Security, said, “Analyzing the information discovered from the NuData Trust Consortium, it is clear that attackers are rapidly evolving their methods to more complex and evolved schemes. Organizations must be ever vigilant as fraudsters leverage the mass of freely available data on the dark web for cybercrime. Expecting consumers to maintain strong, non-reused passwords isn’t realistic, meaning retailers need to shoulder an even larger responsibility to protect their brand and users. Which is why it is more important than ever for online merchants to employ technology that can help them effectively differentiate good customers from bad.”