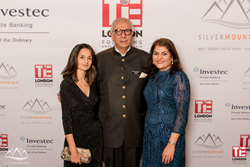 The Indus Entrepreneurs (TiE) London, part of TiE Global, the world’s largest non-profit network for entrepreneurs, recently announced the launch of TiE Women Entrepreneurs (TWE). On Thursday 17th of November, the organisation held a Gala dinner at the Intercontinental Hotel in London where the announcement was made. It comes two days ahead of the global Women's Entrepreneurship Day - a day on which the work of women entrepreneurs is observed and discussed and is held on the 19th November each year.

TWE will be the chapter’s female focused division; promoting and encouraging the core TiE values among its female members.

TiE London’s President Dinesh Dhamija, a British-Indian serial business entrepreneur, best known as the founder of the successful online travel agency Ebookers stated: “I am very pleased to announce the launch of TWE and announce that we have appointed as Co-chairs; Farzana Baduel, Founder and CEO of an award-winning, global strategic PR agency Curzon PR and Radhika Seth, Founder and CEO of International Interior Architecture and Design company Sequoia London, two inspiring women who are great examples of successful female entrepreneurs showcasing how hard work and dedication can lead to being masters of your craft. We had a fabulous turnout at the Gala dinner night and I know this is just the start of what is to come for the Women’s Chapter of TiE!”

Farzana Baduel said: “TWE gives women making strides in their business activities, a community that will champion their efforts, support their endeavours and inspire others to break the glass ceiling in the entrepreneurial field. Networking is one of the most powerful tools for broadening our knowledge and sparking exciting collaborations, particularly in an era where everything is developing at a faster pace. The more we collaborate and encourage each other, the greater chance we will have in changing the gender imbalance within the business community.”

Radhika Seth added: “Networking is crucial to the success of so many business leaders, and in knowing the value of this skill I'm eager to encourage more people, women in particular, to build circles that will nurture their professional development. As an extension of a global community with over 12,000 members consisting of 61 chapters in 18 countries, TWE is going to be a huge force in uniting women not only from across London but on an international scale. The range of events, support and mentoring programs which will be available to TWE members is an exciting trait of the association.”

Senior professionals, entrepreneurs and innovators are welcome to join TiE London, all female members will automatically be enrolled in TWE. Members can expect to attend several key events in addition to TiE London’s regular event schedule comprising industry leaders and key guest speakers who will share exclusive industry insights on topics relevant to every woman.

Be a part of the change and join thousands of international members strengthening their networks while simultaneously helping to close the gender division.

About Farzana Baduel
As Founder and CEO of the global communications firm Curzon PR, Farzana Baduel has spearheaded the award-winning company to establish an international presence. The agency has represented clients ranging from government projects for Russia, Japan, South Korea, Canada and Malaysia to listed global corporates.

Farzana has contributed to leading publications such as The Guardian and PR Week and regularly writes on thought leadership, PR & Marketing, entrepreneurship, personal branding and diversity within the PR industry. She has provided expert commentary for the BBC, Forbes, Al Jazeera.

She has previously served as Vice Chair of Business Relations for the British Conservative Party. Farzana is also the former Vice President of Club 24, an initiative that supports female parliamentary prospective candidates. She is currently an advisor for the Friends of Barisan Nasional UK, Malaysia’s ruling political party and was previously Advisor to the London Development Agency and Enterprise Insight on enterprise issues.

Radhika Seth is the Founder and CEO of SEQUOIA London, an International Interior Architecture and Design company headquartered in Mayfair. As an established thought leader in the luxury goods market, with more than two decades of experience, Radhika has become a leading influence in the industry.

Having worked in her family business NARR International since 1994, Radhika developed an unparalleled knowledge in the sourcing of decorative accessories, antiques, tableware and art for ultra-high net worth individuals (UHNW).

Earlier this year, Radhika merged her companies and rebranded as SEQUOIA London, combining all of the services to offer a complete bespoke solution to her UHNWI clients across London and Internationally.

ABOUT TiE
The Indus Entrepreneurs (TiE), was founded in 1992 in Silicon Valley by a group of successful entrepreneurs, corporate executives, and senior professionals with roots in the Indus region. There are currently 13,000 members, including over 2,500 charter members in 61 chapters across 18 countries. TiE’s mission is to foster entrepreneurship globally through mentoring, networking, education, incubating, and funding. Dedicated to the virtuous cycle of wealth creation and giving back to the community, TiE’s focus is on generating and nurturing our next generation of entrepreneurs.