The Norwegian-based company Sahara Forest Project has signed a cooperation agreement to start a feasibility study to explore opportunities for producing food, freshwater and clean energy near the Western Australian city of Karratha, greening arid areas at the same time. 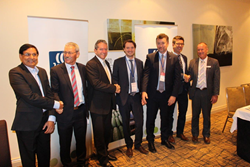 We are excited about supporting this project, and contribute with our industrial experience and nutrient knowledge in the search for new and cutting-edge ways to close the gap between future demands and available resources

From the stage at the New Pilbara Conference in Perth on Tuesday, Mr. Stake launched the start of a detailed feasibility study to assess infrastructure requirements, environmental and social impacts and evaluate the economic viability of intensive agriculture production in the semi-arid environment in Karratha. The study will investigate the potential to realize a new environmental solution using saltwater, sunlight, and CO2 to produce food, freshwater and clean energy.

The initiative is the result of Yara, a major downstream processor and employer in Karratha, identifying an opportunity to develop and diversify the region further. Having already cooperated with the Sahara Forest Project on their pilot project in Qatar, Yara is looking forward to be part of a study to test the viability of an innovative scheme for growing food for commercial use close to its fertilizer and technical ammonium nitrate plants in Pilbara.

“Yara’s core business is to provide sustainable solutions for increased food production and a cleaner environment. We are excited about supporting this project, and contribute with our industrial experience and nutrient knowledge in the search for new and cutting-edge ways to close the gap between future demands and available resources,” said Pierre Herben, Chief Technology Officer in Yara.

“Through Yara Pilbara we are committed to making a positive contribution to Western Australia and the Pilbara, not just through our downstream processing operations but our ongoing community investment and support for forward thinking environmental initiatives such as the Sahara Forest Project,” he said.

The total cost of the feasibility study is about AUD 550.000, with the following contributors: Yara Pilbara, the Western Australian Government’s Royalties for Regions, City of Karratha and The Sahara Forest Project.

Will start the work this week
The cooperation agreement was signed by Hon. Terry Redman, Minister of Regional Development, Cr PeterLong - Mayor City of Karratha from the City of Karratha, Vice President Kjetil Stake of The Sahara Forest Project, and Chief Technology Officer Pierre Herben from Yara International ASA (Yara) at the New Pilbara Conference in Perth on November 29th.
The Feasibility Study will kick-off this week, and the conclusions from the extensive expert report are scheduled to be ready in November 2017.

“The Pilbara region has among the best solar resources in the world, and the existing saltwater infrastructure and available land is of great interest to us. We learnt during our previous trip that local and regional authorities are focusing on opportunities for green growth. I am proud to announce that we have been able to take it a step further – from conversation to action. Our staff is now eager to start exploring how The Sahara Forest Project can help contribute to a new Pilbara”, Stake said.

The feasibility study will hopefully pave way for commercialization of this green technology system for large scale implementation with a vision to produce energy, food and fresh water not only for the citizens of the city of Karratha.

If realized in Western Australia, The Sahara Forest Project contains a unique combination of promising environmental technologies carefully integrated in a system to maximize beneficial synergies. A wide spectrum of leading experts and technology developers are taking part in the effort to realize the project. A cornerstone in the Sahara Forest Project is greenhouses utilizing seawater to provide cool and humid growing conditions for vegetables.

Once implemented, the Sahara Forest Project is a carbon negative solution. The facilities are not only powered by renewable energy, through revegetation of arid areas the facilities can also remove more CO2 from the atmosphere than what the facility emits in the all-year round production.

A key message from the Norwegian innovator visiting Perth was to emphasize on the Sahara Forest Project triple bottom-line approach to any new business opportunity: “We will not engage in any country if we are not convinced that any effort will be good for the environment, good for people and good for business. I am looking forward to getting the results from this study next year”, Vice President Kjetil Stake concluded.