With election recounts looming in 3 states (Wisconsin, Michigan, and Pennsylvania), and millions of voters unhappy over the difference between electoral college results (Donald Trump won) and the popular vote (Hillary Clinton leading), American politics have been anything but normal this year. One group of women however led by the NWPC NYC chapter, is bridging the divide with a multi-partisan convention in New York City this week (Thurs-Sat, Dec 1-3). 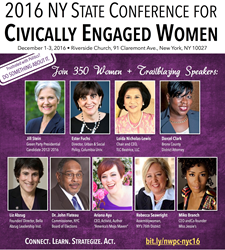 “After this election, it’s more critical than ever that we make a united stand on behalf of women, children, minorities, and other under-served populations. Gone are the days where we can expect our elected officials to get things done" --Ariana Ayu,

This presidential race was a bitter one with people on all sides vehemently defending their candidates; yet early statistics(1) tell us voting was at a 20-year low with only 55% of Americans of voting age actually casting a ballot. “The founders of our country and all those who fought and died for the right to vote must be turning in their graves right now,” said Ariana Ayu, an entrepreneur, activist, and international speaker called America’s Mojo Maven.

It’s easy to cast “the other side” as immoral, ignorant, or wrong, but instead of demonizing those with conflicting beliefs, the National Women’s Political Caucus has sought to bring women in politics together—regardless of party affiliation—since 1971. It’s fastest growing chapter, NWPC New York, is hosting Green Party presidential nominee Dr. Jill Stein plus over 300 other trailblazing women leaders this week (Thursday through Saturday, December 1-3) in their 2016 New York State Conference for Civically Engaged Women.

Chapter President Sharon Nelson and her team have been planning this event since late last year with the theme “21st Century Challenges to Achieving Gender Equality” though they did not know then how appropriate the theme would turn out to be.

“After this election, it’s more critical than ever that we make a united stand on behalf of women, children, minorities, and other under-served populations,” stated Ayu. “Gone are the days where we can expect our elected officials to get things done on their own. It takes us—we the people—to demand change. Not participating is a choice—an apathetic, hopeless choice—but a choice nonetheless.”

Nelson added, “We need to engage in forward-thinking dialogue instead of making politics a grudge match.”

Stein agreed, stating, "Politically engaged women are a powerful force, not just on issues specifically germane to women's rights, but on the issues of peace, climate, class, and racism. I look forward to joining with the conference organizers and participants to start the important work of lifting up women to be leaders in their communities as we all work collectively for the greater good.”

Despite being over 50 percent of the US population, women are vastly underrepresented in political office. According to the Center for American Women and Politics (Eagleton Institute of Politics, Rutgers University(2)), only 46 women have ever served in the US Senate. While Hillary Clinton’s appointment as the Democratic presidential nominee and her historic win of the popular vote (according to the current count) were clear signs that the world has changed since women achieved the right to vote in 1920, the gender divide in politics is still troubling to many.

This convention aims to change that—or at the very least, address it.

Stein will be speaking about her experiences as a two-time Green Party presidential nominee. "I am delighted to be one of the keynote speakers at the New York State Conference for Civically Engaged Women, sponsored by the National Political Women's Caucus of New York City.” Until this year’s election, Stein held the record for the most votes ever received by a woman candidate for President of the United States in the general election (2012).

Other speakers are presenting talks, workshops, and panels on a variety of related sub-themes, such as: civic engagement, women’s self-care, entrepreneurship, leadership, women’s safety and security.

Started by Gloria Steinem, Congresswomen Shirley Chisholm and Bella Abzug, the National Women’s Political Caucus (NWPC) was Co-founded in 1971 by Democratic & Republican women with a common vision to support pro-choice and the passage and ratification of the equal rights amendment (ERA). It is a nonpartisan organization with membership throughout the United States. NWPC NEW YORK Chapter was revitalized on February 11, 2015 under the innovative leadership of the NY Chapter President Sharon Nelson. Moving forward with “Marching towards Parity” 50/50 by 2020, NWPC NEW YORK continues to grow. For more information, please visit: nwpcny.org

Author, activist, international speaker, multi-preneur, mentor, and mom, Ariana Ayu, is the CEO and founder of companies in several industries. She is best known for helping people fulfill their life purpose through business, and her compassionate, no-nonsense style of strategic planning breaks complicated processes into practical, achievable steps. Her professional experience encompasses the fields of business, health, and personal development. Her book “The Magic of Mojo: The Creative Power Behind Success” was lauded by businesspeople, athletes, coaches, and consultants, and she’s received awards and recognition from leading professional women’s groups in the US and UK. Ariana is passionate about empowering women to achieve greater success and happiness– without sacrificing one for the other— and is one of those rare authentic people who truly walks her talk. For more information, please visit: ayutopia.com or themagicofmojo.com