Where the Rubber Meets the Road: Helping Leaders Grow 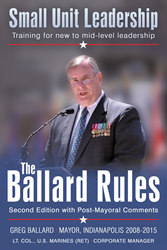 There’s no ‘standard’ way to lead others, but there are a lot of baseline principles that, once mastered, make for a promising future as a leader.

Greg Ballard knows how to lead. Thanks to his time as the mayor of Indianapolis, an active duty Marine, corporate manager and small business owner, he is armed with a diverse and dynamic leadership perspective.

In his book, “The Ballard Rules: Small Unit Leadership,” Ballard turns his experiences into an essential leadership guide for junior and middle-level individuals within any organization. The guide also helps readers prepare for the realities they may encounter as leaders, while also learning the traits and skills that effective leaders possess.

“There are countless people around the world that work for leaders, are leaders of their company or want to be in leadership positions,” Ballard said. “By providing an accessible path to follow, it’s possible to bring out the leader that’s inside everyone.”

In the book, Ballard offers key insights for real business situations, including how leaders can handle hiring and firing authority and use leadership failures as learning experiences. These experiences come from Ballard’s extensive experience in the public and private sectors. After graduating from Indiana University, Ballard served in the United States Marine Corps until 2001, during which he earned the Legion of Merit. Following his military service, Ballard held office as mayor of Indianapolis from 2008 to 2015, during which time he managed the city’s budget through a deep, nationwide recession and was known for boldness, innovation and attracting great talent.

Through it all, Ballard made note of the important lessons that shaped his leadership skills so he could pass them along to the next generation of leaders.

“I’ve held a variety of leadership positions, and each one has taught me something new about how to lead,” Ballard said. “There’s no ‘standard’ way to lead others, but there are a lot of baseline principles that, once mastered, make for a promising future as a leader.”

About the author
Born and raised in Indianapolis, Indiana, Greg Ballard is a graduate of Indiana University. After serving 23 years as an officer in the United States Marine Corps where he served in the Persian Gulf War, Ballard began a career as a leadership and management consultant. Propelled by a call for new leadership in Indianapolis, Ballard was elected mayor of Indianapolis in 2007 and re-elected in 2011. During his tenure as mayor, Ballard invested more than $500 million in local infrastructure, announced more than $1 billion in new construction, and initiated a citywide robotics competition. In 2012, after Ballard spearheaded the city’s first winning bid, Indianapolis hosted Super Bowl XLVI. Ballard continues to engage in workforce issues and energy initiatives and is a Visiting Fellow at the Institute for Civic Leadership & Mayoral Archives at the University of Indianapolis.