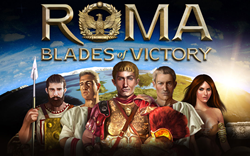 An opportunity to rebuild the Roman Empire from scratch and let the imagination run free.

"ROMA Blades Of Victory" is an exciting city-building strategy game set in Ancient Rome, starting in 8th Century B.C. when Rome was founded. The game is an epic story of glory, leadership, and creativity that will lead the players to building a roman city, training troops, joining an alliance, or starting their own. Players get to wage battles against enemies and thousands of other players around the world, to lead their empire to world domination.

There's something in "ROMA Blades Of Victory" that won’t be found in any other strategy game set in Ancient Rome, and that’s the opportunity to rebuild the Roman Empire from scratch. Rome wasn't always marble and a powerful army, and Rome wasn't built in a day either. In "ROMA Blades Of Victory" players start as a chieftain of a puny village of the iron age, and must work hard to lead their people into becoming the mighty city of Rome.

How well players deal with city management, warfare and research will determine whether they'll conquer or be conquered.

The main goal of "ROMA Blades Of Victory" is to establish the "Pax Romana" meaning that players and their alliance have conquered 51% of the known world. "ROMA Blades Of Victory" features stunning 3D graphics with more than 100 unique buildings and 10 real Roman Wonders, 18 unique military units with 16 levels of enhancements, 72 technologies, a lot of collectibles and 3 map layers. A Real 3D lush environment with hand-painted textures will immerse the players in an exciting world where they can let their imagination and creativity run free.

"ROMA Blades Of Victory" is designed and under development in Rome - Italy by Byosphera Srl, a dynamic team lead by creative duo: Gian Luca Masciangelo and Guido Guidotti Mori. The Game will be available in early 2017 for Web Browser, iOS and Android free of charge. Additional funds required for completion will be raised through a Kickstarter Campaign http://kickstarter.romagame.com to be launched on 30 Nov 2016 4PM (16.00) CET. For more information, brand assets and media pack, please visit our website: http://www.romagame.com