Woodcraft Supply has expanded its operation with two new stores in West Atlanta and Pittsburgh. 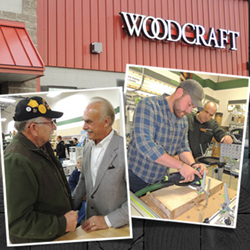 The West Atlanta store adds a second Woodcraft retail location in the Atlanta Metro area, while the Pittsburgh store is a return to the Steel City after an absence of eight years.

Woodcraft Supply, LLC, one of the nation’s oldest and largest suppliers of quality woodworking tools, supplies, and plans, opened two new stores in 2016 to serve metropolitan areas in West Atlanta and Pittsburgh.

“The West Atlanta store adds a second Woodcraft retail location in the Atlanta Metro area, while the Pittsburgh store is a return to the Steel City after an absence of eight years,” Woodcraft president Jody Garrett said. “Woodcraft welcomes both stores to the company’s retail operation that now includes 74 locations across the United States and in Hawaii.”

“After looking for potential areas in which to expand the Woodcraft retail base, we are happy to be serving our loyal customers in Atlanta with a second store and to be back in Pittsburgh,” Vince Grlovich, vice president for marketing and sales, said. “West Atlanta manager Carl Newman, Pittsburgh manager Dan Habjanetz and their sales teams look forward to meeting the needs of woodworkers, homeowners and do-it-yourselfers in their communities.”

Like other Woodcraft stores, West Atlanta and Pittsburgh will serve not only as a retail source for woodworking tools, supplies and plans, but also as an educational resource. “The Woodcraft retail experience begins with knowledgeable staff members who can help with product selection and use. Customers may also attend free tool and technique demonstrations and sign up to take woodworking classes for a fee,” Grlovich said.

Retail stores also support community events such as the Woodcraft National Turn for Troops Turn-a-Thon on Veterans Day weekend. Pens turned at the events are sent to military personnel on active duty and recovering in rehabilitation centers. Both West Atlanta and Pittsburgh joined other stores in hosting turn-a-thons this year.

Founded in 1928 in Boston, Woodcraft sells over 20,000 products at retail stores nationwide, through a monthly catalog and at woodcraft.com. The Woodcraft line includes two strategic brands, PINNACLE® and HIGHPOINT®, exclusive to Woodcraft; a private label brand, WoodRiver®; and “Woodcraft Magazine” Classic® Project Plans and Shop Plans.