Live on Kickstarter, Nerd Out App is the best way to discover and share geeky events. 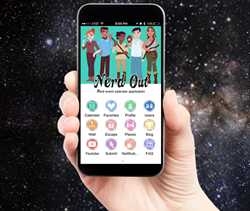 I thought how awesome it would be to not only have a way to keep track of events, but to discover new ones!

Nerd Out, the revolutionary new app built around a community of nerds sharing and attending the world’s best geeky events, is live on Kickstarter and raising funds to scale the project.

Nerd Out App is the best way to find the geekiest events. The community of nerds aggregates the best events from comic conventions, games nights, trivia, cosplay meetups, and more. There is no other solution on the market that aggregates everything in a quick, easy to find way. Nerd Out not only features the largest events, but also shares smaller local events that might otherwise be missed.

"Back in April 2015, I was invited to a number of events because of my nerd based blog. I was talking to a friend about how difficult it was keeping track of all these events because the information was so scattered (Twitter, Facebook, Tumblr). I thought how awesome it would be to not only have a way to keep track of events, but to discover new ones!” says founder and creator Michelle Jensen.

Nerd Out App is loaded with great features to discover the best events and locations. Users can find thousands of events, locate escape rooms, connect with friends, submit their own events, discover local comic book and other nerdy businesses in their area. The app is currently in 35 locations worldwide and quickly growing.

Through their Kickstarter campaign, the company is hoping to scale out the project to include more events and robust features. In addition to being able to expand to more countries worldwide, plans are in place to improve search functionality with filters and make it easier connect and chat with friends via messaging and stickers. For Kickstarter backers, the app plans to offer an exclusive algorithm feature that recommends events based on user interests.

"Everyone knows about San Diego Comic Con, but not so much about local events. And what do you do for the rest of the year?,” asks Jensen. “Some of us have anxiety about large events, so events like SDCC are not conducive. Also, can be more difficult to connect with people when you’re running from panel to panel. It’s nice that Nerd Out gives you the option to go to a smaller or a larger event.”

Nerd Out App is currently live and available to support on Kickstarter: http://kck.st/2gH5EVM

About Nerd Out App

Nerd Out App is the best way to find local events for nerds just like you. The company was founded by Michelle L. Jensen who was raised on Long Island, NY. and later moved to Los Angeles to study Film/TV. She's a nerdy travel blogger, fangirl, and cosplayer. She is excited to bring others together through the nerddom! The Nerd Out App is available to download on Apple iOS and Android

For more information on Nerd Out App please visit http://www.nerdoutapp.com/